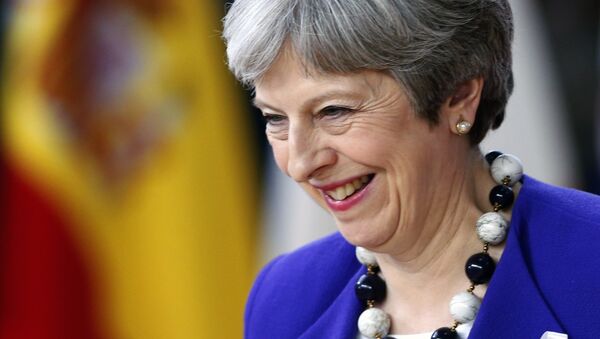 UK Prime Minister Theresa May in her address to the country's Cabinet commented on the Russian diplomats' expulsion from a number of states, explaining it by "the threat Moscow allegedly poses".

"Yesterday was a significant moment in our response to this reckless act of aggression, but there is still more to be done as we work with international partners on a long-term response to the challenge posed by Russia," her spokesman stated, reporting remarks made by May at a cabinet meeting.

According to the spokesperson May, in her address to the Cabinet, stated that countries expelling Russian diplomats were acting so not just out of solidarity but because they recognized the threat Moscow allegedly poses.

"I welcome the international support that we have garnered," May said "This isn't just a matter of the UK position and working with the UK. I think it is the national security interests of the countries concerned."

The prime minister went on by revealing that the UK Interior Ministry has undertaken the review of tier one (entrepreneur) visas, which have been issued to roughly 700 Russians who were granted these visas in 2008-2015. She admitted that she did not know if the Home Office was looking into any of the 700 Russians specifically.

The prime minister noted that the review of the program was needed for a variety of reasons, rather than only in light of the Skripal case.

The Expulsion of Russian Diplomats

The prime minister has been commenting on the expulsion of 100 Russian diplomats from a number of EU countries, as well as the United States, Canada, Albania, Norway and Ukraine, which was announced on March 26 in connection with Moscow's alleged involvement in the nerve agent attack in the UK city of Salisbury.

She has also reiterated Moscow's "mirror-response" stance over the Skripal case, saying that the corresponding actions would be taken by the Russian side in response the United States and the European Union, as well as to the closure of the consulate in Seattle.

On March 4, former Russian intelligence officer Sergei Skripal, who then worked for the British MI6 and his daughter Yulia were found unconscious on a bench at a shopping center in Salisbury.

Both of them are currently being treated for exposure to what UK experts consider to be the A-234 nerve agent, allegedly developed in the Soviet Union.

Following the incident, UK Prime Minister Theresa May earlier in March accused Russia of orchestrating the attack and expelled 23 Russian diplomats as a punitive measure.

The Russian side, in turn, has repeatedly rejected all of these accusations, offering to assist in the investigation.

Moscow's request that it be provided with samples of the chemical substance used to poison Skripal was waved aside by the UK. As a part of the promised reciprocal measures, Moscow has expelled 23 UK diplomats and ordered the British Council to stop its activities in Russia in response to the UK move.