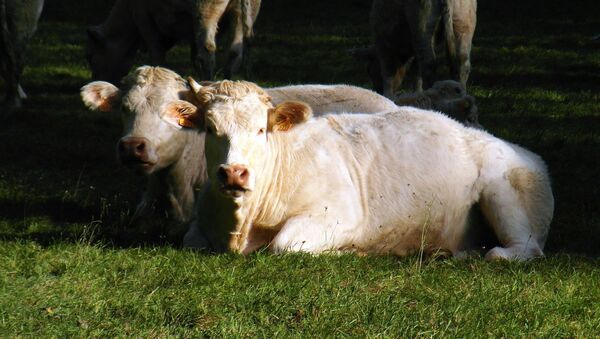 CC0 / /
Subscribe
The mysterious death of cows has been attributed to an unlucky streak of coincidences and has triggered Danes' ire over what they perceived as "animal cruelty."

Sixteen cows have been found dead on an uninhabited island off the southern coast of Denmark, the Danish newspaper Nord Jyske reported.

The carcasses were found dead by a person passing by the roughly one square kilometer island of Dybsø in a boat. The cause of death of the cattle remains unclear.

"It is being investigated whether there has been a crime. We have established an animal cruelty group, and it is up to the vet to investigate whether it is about neglect," Bo Georg Petersen of the South Zealand and Lolland-Falster police said.

The owner of the cows was escorted to the police, and it remains unclear when he last saw the animals alive.

The owner, Niels Erik Nielsen, had several explanations for why the animals lost their lives, blaming the mysterious tragedy on "an unfortunate streak of circumstances." Firstly, the cows were of the Galloway breed, which are known for being unruly. Furthermore, they were disturbed and difficult to get into the corral. According to Nielsen, the calves on the island never learned to eat properly, because of the cows eating their feed.

"They died of malnourishment as they have they didn't received food on time as I have been unable to get to the island," Nielsen told TV Øst, pointing to a two-week period where the southern part of the region was severely affected by snow and cold weather. Nielsen also voiced his disagreement over the number of cows affected, estimating the death toll at eight.

The Danish Nature Agency, which owns the island of Dybsø and has a lease agreement with Nielsen, referred to the cow death as an "unfortunate incident."

"It is a very unfortunate incident, which we are paying close attention to," Claus Jespersen of the local Nature Agency department said. "It is the owner's responsibility according to the lease agreement to control the animals and make sure to live up to the Animal Protection Act." Nevertheless, he stressed a "good working relationship" with Nielsen and was reluctant to disclose the possible consequences.

Nevertheless, the news of the cow death sparked outrage among Danish environmentalists, provoking lots of angry comments in the Biodiversity Facebook group, among others.

Dybsø is a 1.34 square kilometer uninhabited island situated between the Karrebæksminde Bay and the Dybsø Fjord. The island is protected and is part of the Dybsø Fjord wildlife reserve, however, there is public access to Dybsø.