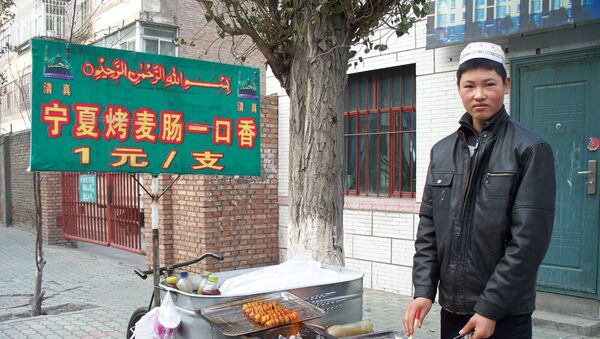 Northwest China's Ningxia Hui Autonomous Region has recently been involved in the controversy around Arabization, with some measures against pan-Islamic tendencies already having been taken.

Chinese Ningxia region has prohibited labels in the Arabic language on halal products, according to the Global Times.

Residents from Wuzhong and Yinchuan confirmed to the newspaper that restaurants and food stores were required to replace the halal food labels that had Arabic inscriptions on them with new ones written in both Chinese and its official Romanization system — pinyin. Some supermarkets even had to remove the goods from the shelves until the label was replaced.

"Changing the new halal food label aims to rectify the halal food market and stop the pan-halal food tendency. The move is in accordance with China's laws and policies on religious freedom," Li Anping, former deputy secretary-general of the China Anti-Cult Association (CACA) said, as quoted by the Global Times.

Changing labels on halal food is not the only measure Ningxia has been taking in order to safeguard social stability and ethnic unity in the region.

Russia Makes World's Top 50 Destinations for Halal Holidays
In March, plans to reconstruct the Sino-Arab Axis in Yinchuan, the spot built in 2016 to demonstrate good relations between the Arab world and China were revealed. Authorities intend to change the previous Arabic-style buildings into a traditional Chinese style so as to "create a happy, harmonious and unified atmosphere."

In July 2017, the option of ordering halal food using the Chinese popular smartphone application Meituan prompted criticism from citizens, since, in order to convince customers to buy halal dishes, the company promised to pack such orders in separate packages and containers. Non-Muslims users regarded it as discrimination.

Halal is the food prepared in accordance with Islamic law enshrined in the Koran. Muslims are forbidden, in particular, to eat pork, as well as meat of other animals that have been butchered in violation of the traditions.