Three Whistleblower Journalists Run Over by Vehicles in 24 Hours - Reports 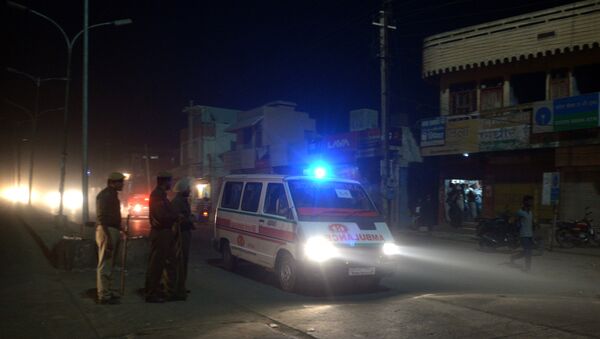 Three Indian journalists have been allegedly murdered for reporting on corruption in the Indian states of Bihar and Madhya Pradesh.

New Delhi (Sputnik) — India woke up on Monday to the alleged murder of three journalists in the states of Bihar and Madhya Pradesh. On Monday morning, 35-year-old Sandeep Sharma was run over by a truck while he was operating a motorcycle in Bhind of Madhya Pradesh. Video footage of the alleged murder shows a truck suddenly changing its course hitting and running over Sharma who was riding a motorcycle on a not-so-busy road. Sharma had recently exposed how the police connived with the sand mafia to carry out the illegal mining of sand in Bhind. The local media, quoting eyewitnesses said the cops responded only after 15 to 20 minutes despite the fact that spot was only a few meters from the police station.

#WATCH:Chilling CCTV footage of moment when Journalist Sandeep Sharma was run over by a truck in Bhind. He had been reporting on the sand mafia and had earlier complained to Police about threat to his life. #MadhyaPradesh pic.twitter.com/LZxNuTLyap

Another incident took place on the Ara-Sasaram highway under the Garhani police station of Bihar, an SUV (sports utility vehicle) rammed into the motorcycle driven by two local journalists killing the duo on the spot. Family members of the journalists and locals alleged that it was a murder executed by a former village head against whom the journalists had carried out extensive reporting on the alleged irregularities he committed to utilize the funds meant for the development of the village.

​The journalists — Navin Nishchal and his associate, Vijay Singh, were working for Hindi daily Dainik Bhaskar. The SUV was allegedly driven by the husband of the former village head Saheeda Pravin.