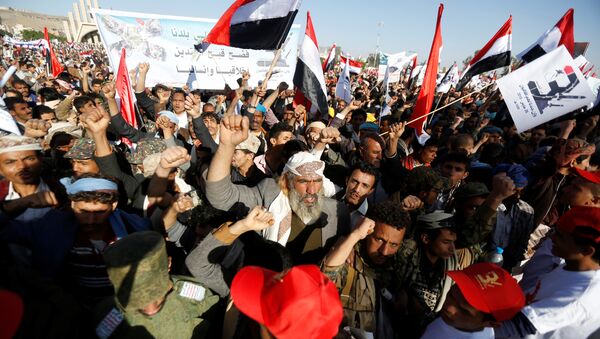 Tens of thousands Yemeni citizens gathered this Monday in the country's capital of Sanaa to mark the third anniversary of the war.

The military conflict in Yemen between the armed opposition Houthi faction and a Saudi-backed government headed by exiled Yemeni President Abd Rabbuh Mansur Hadi began in 2015.

Looool thats funny im in sanaa i didnt hear anything from that..

​​According to the United Nations, some 10,000 Yemenis have been killed and 53,000 wounded, making the conflict the world's worst humanitarian crisis.

The Houthi rebels control the country's north, including the Yemeni capital of Sanaa and the largest port of Hodeidah, while President Abedrabbo Mansour Hadi's forces control southern Yemen.

At the same time, relations between Hadi and his southern separatist allies deteriorated earlier this year, after the latter seized several government buildings in the country's city of Aden, demanding the government's resignation.