Google in Deep Trouble: Company Risks Being Broken Up by European Union 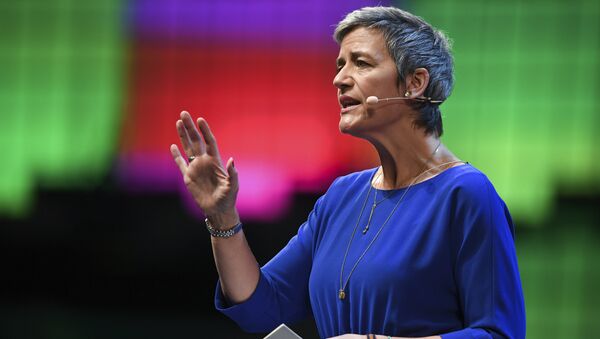 © AFP 2021 / PATRICIA DE MELO MOREIRA
Subscribe
The European Union has threatened to split up Google into smaller companies. The US firm's dominance of the internet is out of kilter with the EU's anti-trust legislation.

Last June she hit Google with a record £2.1 billion fine (US$3 billion) for giving its own comparison shopping service an unfair advantage on the search engine.

Google appealed against the European Commission's judgement, which would have meant it had to rearrange the way its searched algorithm ranks websites.

The California-based company is facing two other anti-competition lawsuits from the European Commission.

Most companies pay on average 24% corporate tax. Digital companies less than 10% in Europe. We propose to update our understanding of where to tax and what to tax — to ensure fair taxation also in our digital world @pierremoscovici #digitaltax

Google Does Nine out of Ten Internet Searches in Europe

Google has a 91.5 percent share of the search engine market in Europe and Mrs. Vestager said the EU was not comfortable with this virtual monopoly.

Asked if the EU was considering forcing Google to break up into smaller companies, in a similar way to the banks after the 2008 financial crisis, she said: "It is important to keep that question open and on the agenda."

"We are not there yet but it is important to keep an awakened eye," she told the Telegraph.

Remember when Facebook, Twitter, and Google were going to change the world by depriving dictators of a monopoly of control over narratives?

Mrs. Vestager, who has also faced down Apple and Amazon in recent months, said she feared Google would soon be indispensable for European businesses.

But the Danish commissioner was quick to insist the EU was not in the market of punishing companies for being successful.

"There is no ban on success in Europe. You get to be dominant and you get a special responsibility that you don't destroy the already weakened competition. We have proven their dominance in search and we have found they have   misused this dominance to promote themselves and  diminish competitors," Mrs. Vestager told the Telegraph.

Vestager Has Taken on Apple and Amazon

Mrs. Vestager, who has been in the job since 2014, has ordered the Republic of Ireland and Luxembourg to demand back taxes.

Google's troubles come just as another internet colossus, Facebook, is facing intense scrutiny for its activities.

.@safiyanoble at #EAW18: Why study google? Because it is a monopoly & people trust it. pic.twitter.com/ItElVseLNe

Cambridge Analytica allegedly used the data while working for the Trump campaign.

Google says it is working on a plan to remedy the anti-competitive behaviour but last month some of Google's opponents said the only way to prevent the monopoly was by breaking the company up.

000000
Popular comments
Fortunately Russia has Yandex, Kaspersky and Vkontakte. Search, Security and Social Network. Also Mail.ru. Europe really needs to do the same, if they want to be insulated from undue US influence and snooping.