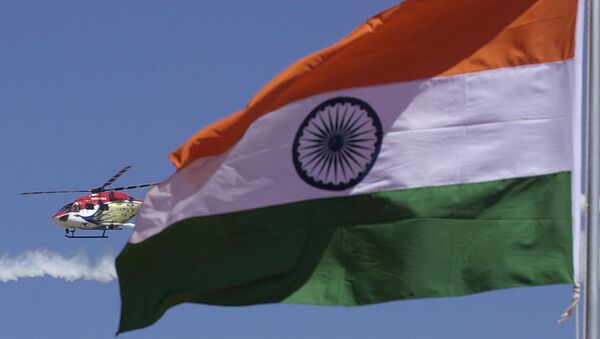 © AFP 2022 / INDRANIL MUKHERJEE
Subscribe
As India plans to add another air force base along the border with Pakistan, experts suggest it would be more prudent of the government to spend the scarce funds on strengthening the security of operational air bases and propping up the depleting strength of squadrons.

New Delhi (Sputnik) — The Indian government has approved a new air base in Deesa of Gujarat, which is less than 200 kilometers from the border with Pakistan. The new airbase is expected to cost over $160 million.

"Glad to announce that the Central government under the leadership of Prime Minister Shri Narendra Modi has given a nod for making Deesa an airbase of the Indian Air Force," Vijay Rupani, the chief minister of Gujarat announced on Friday.

The decision comes at a time when the Indian armed forces have warned the government about the consequences of the funding shortage for force modernization, operations, and maintenance. While the projected expense for the financial year 2018-19 is $17.6 billion, only $10.1 billion has been allocated in the budget.

"The representatives of Air Force intimated the Committee that the shortfall in the budget will lead to an inability to procure spares and fuel. It will also impact maintenance and training of fleet and serviceability. Besides this pace of modernization will be a challenge," the parliamentary panel on defense said in its report, tabled on March 13.

The committee also raised the issue of paucity of funds for modernizing security at airbases — a problem which came to fore in 2016 when terrorists attacked the Pathankot airbase. A committee headed by Lieutenant General Phillip Campose, set up by the defense ministry, had found gaping holes in the security set up of many military air bases. However, the finance ministry has made no particular fund allocation for the purpose.

Meanwhile, the Indian Armed Forces have also been asking the government to expedite infrastructure projects along the border with China. The construction of four strategic rail projects — the Missamari-Tenga-Tawang line, the Bilaspur-Manali-Leh line, the Pasighat-Tezu-Rupai line, and the North Lakhimpur-Bame-Silapathar line — have not started yet due to the unavailability of funds, despite the projects being declared as projects of "national importance" cleared by the Cabinet Committee on Security in December 2015.

"The proposal to build an airfield at Deesa has been there for nearly four decades. This is meant to fill the crucial gap on the western border in Rajasthan — Gujarat sector. However, many are asking why not concentrate on the northern border. The airfields in the North East and Central India are already being strengthened. Also, the Advanced Landing Grounds in the mountains have been upgraded. A major new airbase has come up in Panagarh. Yes, the highest priority for the IAF remains re-building the depleting combat squadrons. However the two activities are exclusive to each other," Air Marshal Anil Chopra (retired) told Sputnik on being asked whether the government was missing its priorities.

What should the IAF be adding? Bases or fighters & AWACS. Teeth or tail? Operationl or establishment expense? https://t.co/JunmqdH7qo

"What should the IAF be adding? Bases or fighters and AWACS? Teeth or tail? Operational or establishment expense?" — the larger question before the IAF — as put up by IAF veteran Vijainder K Thakur, known for his independent views, remains unanswered.

The views and opinions expressed by Air Marshal Anil Chopra (retired) in this article are those of the speaker and do not necessarily reflect the position of Sputnik.