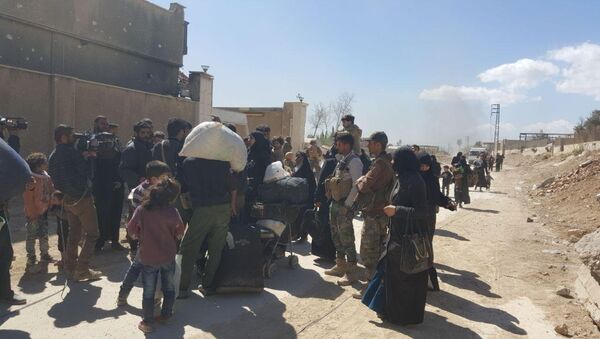 MOSCOW (Sputnik) - The civilians continue leaving the besieged Damascus suburb of Eastern Ghouta via the humanitarian corridors, the Russian Defense Ministry said in a Saturday statement.

"The civilians continue leaving Eastern Ghouta through the humanitarian corridors with the assistance of the Russian Center for Reconciliation of Warring Parties," the statement said.

The ministry added that the representatives of the reconciliation center had provided about 2,600 Syrians with food and water over the past 24 hours.

In the statement, the ministry added that it was broadcasting live from the corridors' checkpoints using video cameras.

The ministry added that almost 1,000 militants had left Damascus suburbs of Eastern Ghouta in Syria on Sunday via the humanitarian corridor near the settlement of Irbin.

"A total of 988 militants and members of their families have been evacuated to the province of Idlib in 17 buses… along their way the security is ensured by Syrian police under control of the officers from Russian center for Syrian reconciliation and representatives of Syrian Arab Red Crescent," the statement read.

According to the Russian ministry, over 108,000 people have left Eastern Ghouta since the introduction of daily humanitarian pauses in the area.

'As Soon As Daesh Seized Power, Torture Began' - Eastern Ghouta Resident
The evacuation was launched after an agreement had been reached as a result of negotiations between the representatives of the Russian center for Syrian reconciliation and leaders of the al-Rahman Legion armed opposition group, the ministry added.