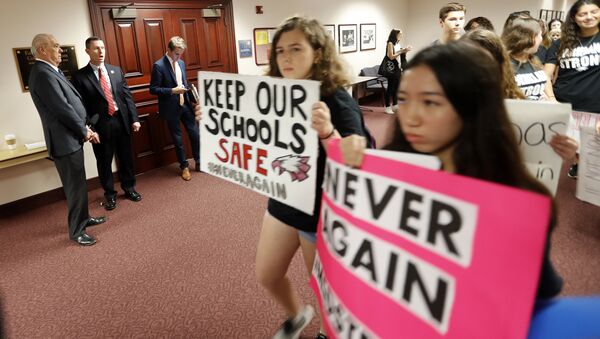 The move was dictated by a series of violent attacks in US schools, perpetrated by current or former students using guns, with the latest one taking place at Great Mills High School in Maryland on March 20, leaving two students and the assailant wounded.

A high school in Massachusetts will try to prevent mass shootings by utilizing a new program, developed by Social Sentinel, a data analytics company, reports the online outlet Fatherly.com. The software analyzes students' online behavior, seeking signs of depression, isolation, disposition to violence and other markers indicating a person may pose a threat to him\herself or others. If some students raise a flag — they are immediately reported to the school's authorities.

Social Sentinel founder and CEO, Gary Margolis, claims the company can study the language of school shooters and seek similar patterns in order to improve their algorithm and prevent future violence.

According to Fatherly.com, many experts remain skeptical of the software's ability to properly detect "violent behavior," but what worries them the most, is that usage of such "surveillance" methods violates students' rights. Kade Crockford, director of the Technology for Liberty Program at the American Civil Liberties Union, is concerned that it moves modern schools even closer to prisons.

Rallies for gun control took place across the US on March 24 with hundreds of thousands of demonstrators in Washington demanding Congress adopt stricter legislation and 800 sister rallies hitting other American cities. The protests were triggered by the spate of mass shootings in the US since the beginning of the year.