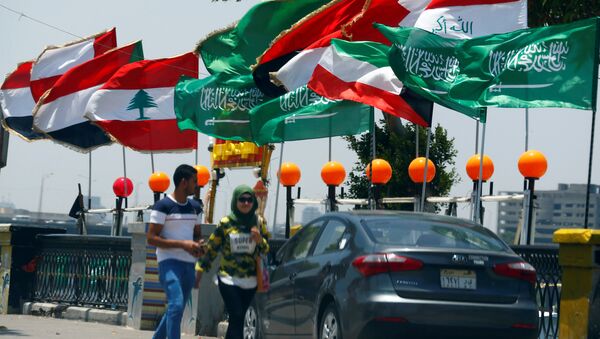 "The 'Arab spring' has resulted in a catastrophe in the region. This huge US project was implemented by the team [of former US Secretary of State] Condoleezza Rice. Its aim was to overthrow the leadership of all the Arab countries and to divide the states into smaller countries," the leader of the liberal Ghad Party said.

Egyptian presidential hopeful Mostafa Moussa has also mentioned, that he hoped for the further enhancement of ties between Russia and Egypt.

"I am happy that in recent times there's been a rapprochement with Russian President Vladimir Putin. Today I do not see any difference between Russian and US capabilities. I see that Russia is a great country… I hope for the further enhancement of relations between Moscow and Cairo," the candidate said.

Mostafa Moussa, the leader of the liberal Ghad Party, told Sputnik that he wished to obtain 50 percent of the votes in the election scheduled to kick off on Monday.

"I hope that over 50 percent of voters will go to the polls. It is up to them to decide whether they will elect me or President Abdel Fattah Sisi. As a person who is running for the post, I hope for a victory. I want to gain 50 percent of the votes," he said.

Court in Egypt Sentences 10 People to Death for Terrorism
The candidate also shared his plans to fulfill the so-called program of national capitalism in the case of his victory. He remarked that there were over 1,200 factories in Egypt, which had been closed due to economic reasons and stressed a need to reopen them, by issuing companies’ shares in circulation. According to Mostafa, the government and banks will remain the main stakeholders, while shares with the value of 5,000 Egyptian pounds (about $300) each are supposed to be distributed among Egyptians with a possibility of their purchase by installment payments.

READ MORE: Egypt May Lose $178Mln to US Steel Tariffs

The first round of Egypt's presidential election will be held from March 26-28. If no candidate receives an absolute majority, a second round will be held on April 24-26.

The situation in Egypt has been unstable since 2013 when the army overthrew then-President Mohamed Morsi. The Muslim Brotherhood-linked president elected in 2012 after Hosni Mubarak's resignation amid the Arab spring uprising. However, in July 2013, amid the wave of public discontent, the Egyptian army ousted President Morsi and declared a transition period in the country. Morsi supporters staged mass protests, demanding his reinstatement. Hundreds of Egyptians were killed in the subsequent riots and clashes.