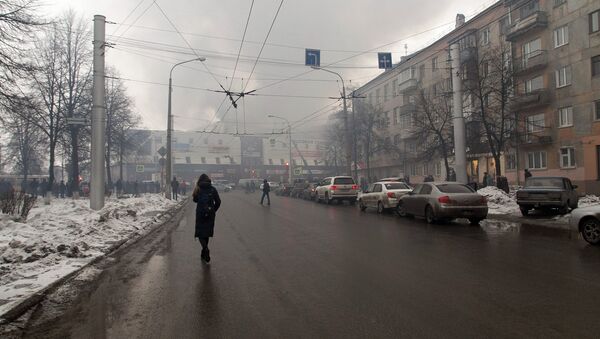 © Sputnik
/
Go to the mediabank
Subscribe
International
India
Africa
A fire in a shopping mall in Russia's Kemerovo left 37 people dead, according to the crisis center. Earlier, 69 people were reported missing, including 40 children.

A fire engulfed a 'Winter Cherry' shopping centre earlier on Sunday in Russia's city of Kemerovo leaving at least four children dead, according to sources. 37 were later reported dead.

Later, the death toll was confirmed by the Russian Investigative Committee. "At the moment, the death of 37 people in a fire in the shopping mall in the city of Kemerovo is confirmed. The searches continue," the committee said on Telegram.

The national center for crisis management reported that over 660 people are engaged in emergency response activities. The center also reported that more that 40 children went missing in fire.

"According to preliminary figures, a search of 41 children is ongoing," Andrei Mamchenkov told the Rossiya 24 broadcaster.

"The firefighters and rescuers are working at the risk of their own lifes… there is no access to certain rooms [of the mall] because of high temperatures," Puchkov said at a video conference dedicated to the deadly blaze.

"At the moment the firefighting process is ongoing, the interfloor constructions… could collapse," Russian Deputy Emergencies Minister Vladlen Aksyonov said later as broadcast by the Rossiya 24 broadcaster.

Puchkov also said that the ministry would increase number of rescuers engaged in emergency response activities.

According to earlier data by a source in the local emergency services, 69 people are missing, including 40 children.

​During the fire, the police have encircled the area of the incident, evacuating everyone nearby. There were reportedly at least a hundred of people inside the trade centre at the moment.

Kemerovo, a coal-mining centre in Siberia, is located some 3,600 km (2,200 miles) east of Moscow. (Reporting by Vladimir Soldatkin; Editing by Kevin Liffey)