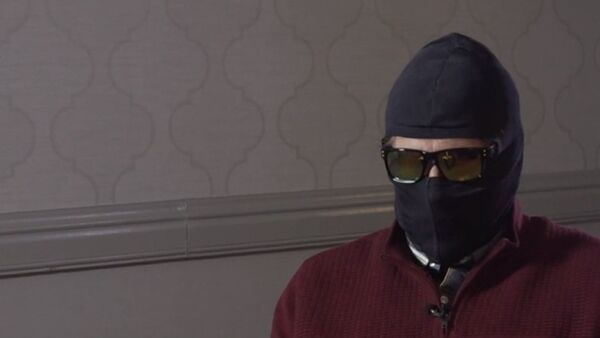 © Photo : BBC (screenshot)
Subscribe
International
India
Africa
The former head of the Russian anti-doping agency, currently residing in the US under a witness protection program, demonstrated an unusual appearance in public.

Grigory Rodchenkov, an informant for the World Anti-Doping Agency (WADA), attended a recent meeting with representatives of the US government to discuss sporting and wider political issues.

But what caused vivid debates in social media was not the meeting itself, but the fact that the former Russian official was wearing a balaclava covering his face, according to Insidethegames.

Rodchenkov met with Senators Ben Cardin (D-MD) and Cory Gardner (R-CO), as well as a member of the House of Representatives, Sheila Jackson-Lee (D-TX, 18th district). Cardin said that he admired Rodchenkov's "bravery."

Twitter users have been set ablaze by Rodchenkov's awkward disguise, as well as his personality.

They think #Rodchenkov is a politician… 😂🤦🏻‍♀️ the states gone wild. It just shows how ridiculous the story is if US government body consults a psycho! Anybody, please, tell them to stop! https://t.co/YLDAii1OvQ

Can anybody point me in the direction of good articles/videos on Grigory Rodchenkov and his trust worthiness? I can't see any real evidence has been released and I'm starting to think the Icarus documentary is more anti-Russian propaganda. @RussiaHouseEU @RT_com @georgegalloway

Rodchenkov is 2nd Litvinenko albeit more successful in Western hybrid war of dirty tricks against Russia. Yet his claims eeringly grow more & more delirious (probably because he is drug addict). He alleged Moscow 1980 Olympics was full on doping though he started work in 1985 https://t.co/6eFptweYEJ

This is not the first time the informant has changed his looks when appearing in public. The former Russian official did it during an interview with CBS in February, claiming that the move was due to security reasons, as many people — he avowed — sought to kill him.

During a subsequent interview with BBC in late February, Rodchenkov appeared before the cameras wearing a black balaclava and sunglasses. There were even rumors that he underwent plastic surgery to change his looks.

In 2016, the former head of the Russian anti-doping agency triggered a WADA investigation into the activities at the Moscow anti-doping center, claiming that Russia has a state-financed doping program. Russia has repeatedly denied the allegations, although it acknowledged that a doping problem exists and promised to address the issue.

The investigation resulted in a ban of the Russian team from the 2018 Winter Olympics, with 43 athletes suspended for life.