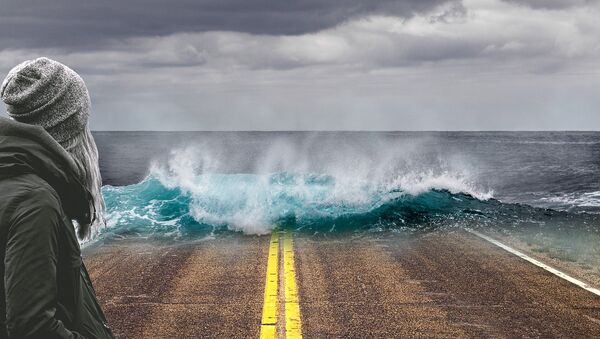 After the world famous biologist Paul Ehrlich told The Guardian newspaper about the possible tragic consequences of overpopulation and growing toxification of our planet, Sputnik decided to send the scientist a few questions and asked him to comment on the issue.

The collapse of civilization in the next few decades is imminent, and it could be triggered by a variety of factors, Paul Ehrlich told Sputnik.

"It could be caused by a nuclear war, droughts and floods leading to mass starvation, a bursting of the debt bubble, political unrest from refugee flows or increasing economic inequity, trade wars, terrorism or synergizing combinations of these and other factors," the researcher said.

The main reasons behind all these negative predictions are, according to the scientist, overpopulation and overconsumption. He is confident that these two factors will drive our civilization over the edge.

"The basic problem is the wrecking of human life-support systems by growth in aggregate consumption — and that is a product of growth in population size and growth in per capita consumption. Various forms of inequity — gender, racial, religious could contribute by making it less likely that people will provide the cooperation required to give the chance of avoiding a collapse," the analyst argued.

In Ehrlich's view, the situation has significantly worsened since he released a corresponding warning in his book "The Population Bomb" 50 years ago.

READ MORE: Doomsday: Biologist Warns of Collapse of Civilization in Near Future

"The population has doubled in size, climate disruption is now much more thoroughly understood and is already causing problems, there soon will be more weight of plastics in the oceans than fish; hormone-mimicking synthetic chemicals are now toxifying earth from pole to pole and are the likely cause of plunging sperm counts around the world; almost half of wildlife has been exterminated in the greatest mass extinction episode in the last 66 million years," the analyst said.

According to him, the chances of a global nuclear war wiping out civilization are now also "higher than at any time during the Cold War except for the Cuban missile crisis."

Although, there have been numerous warnings about the way humans are threatening life on earth, governments and the international community have so far failed to reduce this threat, and Ehrlich believes that there are several reasons for this.

Among them are "the lack of education in basic science, especially among economists and politicians, who think economic growth is the cure for everything rather than what it is — the basic disease," the analyst said, adding that a key role is also being played by such negative traits if a human character as "greed, stupidity and arrogance."

Answering the question about which measures he considers essential to change the situation for the better, the scientist said that, among other things, it's important to "supply everyone with modern contraception and backup abortion," "give women equal rights and opportunities with men," "end racial and religious discrimination so that all people are free to help solve the human dilemmas" and "redistribute wealth."

Climate Change Warming Leads to Rise in Female Green Sea Turtles
The Population Bomb, written by Paul Erhlich jointly with his wife Anne in 1968, sold some two million copies and has been translated into many languages.

The book, viewed by many as controversial, said that "hundreds of millions of people are going to starve to death" in the 1970s — but this tragic turn of events was prevented by a green revolution, the scientist argued.

In May, it will be 50 years since Ehrlich's work was published and the author remains committed to his predictions. Although some aspects and timings were wrong, Ehrlich is confident that the general idea of the book corresponds with reality.

The views and opinions expressed by Paul Ehrlich are those of speaker and do not necessarily reflect Sputnik's position.