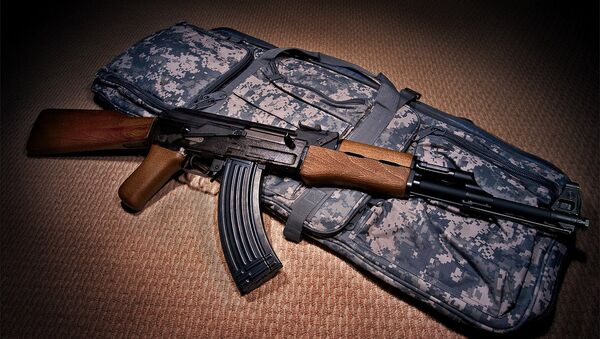 CC BY 2.0 / brian.ch / AK-47 Assault Rifle
Subscribe
Federal authorities in the US are reportedly conducting an investigation into a gun plant in Florida that is supposedly run by people, who have ties to Russian President Vladimir Putin. Sputnik discussed the matter with the Russian historian and former deputy chief editor of the “Nezavisimaya Gazeta” newspaper Vadim Soloviev.

Vadim Soloviev is confident that the latest investigation into the activities of the RWC (Russian Weapons Company) Group LLC, which owns the Kalashnikov USA plant in Florida, is another act of commercial war with Russia. He believes that ever since Western countries, especially the US, realized that Russia has become "one of the centers of power" in the world, they have been seeking a pretext to "demonize" the country and all recent events, such as the Skripal poisoning accusations and banning Russia from participating in the Olympics, fall in line with this new policy.

The scholar also notes that the RWC Group LLC, which produces guns modeled after the iconic AK-47 assault rifle, was most likely targeted for the competitive characteristics of its guns and this probe is just another act of a trade war by the US against Russia. He adds that no gun has so far surpassed the effectiveness and popularity of the AK-47 and since the Kalashnikov plant also produces rifles for hunters, it was a dangerous rival for other gun-producing companies in the US.

Soloviev is adamant that the investigation will lead to a new batch of sanctions against Russia, even if it will find no proof of ties between RWC and Moscow. As an example, he recalls the Skripal poisoning case, when the UK started discussing and imposing sanctions even before the official investigation was concluded, not to say without any evidence of Russia's involvement in their hands. According to him, the Kalashnikov case will be used to further fuel anti-Russian hysteria.

The historian believes that there is no connection between the investigation and the spate of mass shootings in the US since the beginning of the year, but he doesn't exclude the option of Washington playing the mass shootings card and "finding" that nonexistent connection.

Soloviev doesn't think that Russia will be concerned with countering any possible future sanctions caused by the Kalashnikov probe. According to him, the loss of such market as the US can be easily replaced by other perspective and developing markets in the world. Since the AK-47 is a highly popular brand, Kalashnikov won't have any problems entering them.