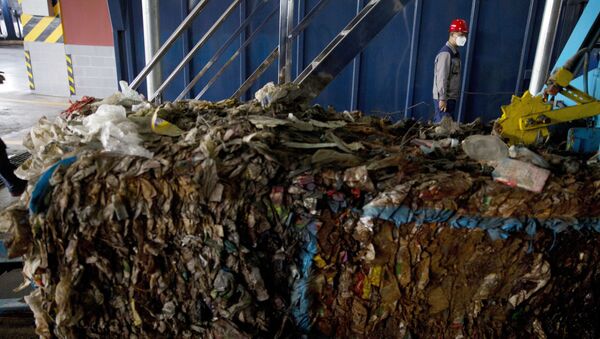 The new trade war announced by US President Donald Trump is seeing some immediate and effective blowback in the form of a refusal by Beijing to lift its ban on the import of foreign garbage.

China Syndrome: Beijing Readies Response to US Declaration of Trade War
China has long been the world's largest importer of waste and recyclable commodities. Now that Trump has threatened harsh new tarrifs in an escalating trade war, Beijing has announced that it will not overturn a new ban on accepting shipments of garbage from the US and other countries, leaving industrialized nations scrambling for options on how to dispose of an ever-mounting landscape of trash.

As China in 2016 was responsible for accepting some 80 percent of US recyclable waste, the move has business and legislators pleading with Beijing to roll back new restrictions on waste imports.

A Washington representative told a World Trade Organization (WTO) meeting on Friday that China's ban on scrap imports was "disruptive' and hinted that Beijing would be to blame for rapidly escalating landfill in the US and the rest of the world.

"China's import restrictions on recycled commodities have caused a fundamental disruption in global supply chains for scrap materials, directing them away from productive reuse and toward disposal," suggested the US spokesperson at the WTO Council for Trade in Goods meeting in Geneva.

US trade representatives at the WTO in Switzerland accused Beijing of altering China's import recycling rules too fast, resulting in a compromised industry that is not able to evolve and could face collapse.

The accusations took an ironic turn in light of the new Trump trade war directed, in part, at Beijing, as the US representative to the WTO declared that China was implementing an unnecessarily strict trade policy, according to Reuters.

"We request that China immediately halt implementation and revise these measures," stated the US WTO representative.

An EU spokesperson to the Friday WTO meeting asserted that the new Beijing policy would result in scrap commodities going to third-world countries which, while welcoming the business, do not adhere to ecologically-safe recycling practices, simply dumping unwanted by-products in enormous landfills or burning the post-recycling waste, contributing to human-induced climate change.

But Beijing refuted US assertions of China's responsibility as the world's garbage collector.

A spokesperson for the newly-empowered administration of Chinese President Xi Jinping noted that nations must individually shoulder the responsibility to dispose of their own waste in an environmentally-acceptable manner, and that Beijing, in refusing to buy the world's recyclables, was simply moving to clean up its own regions.

"China is seeking a path toward harmonization of man and nature," a Geneva-based WTO official quoted China's trade delegate, cited by Reuters.