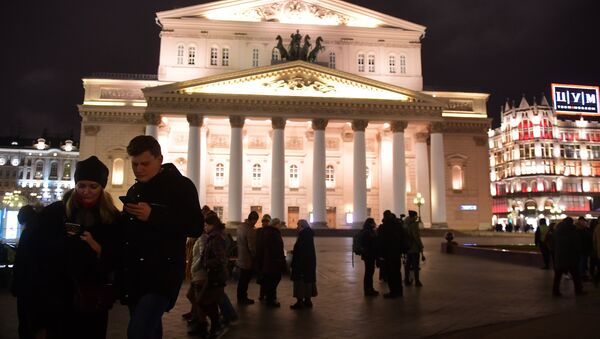 "I grew up as a pianist, my first teacher was Bulgarian, and all of my teachers after were Russian. So I’ve always had a deep love for the Russian school of teaching. So much music comes from Russia, so much of schooling," Ainsley said. "We’ve always idolized Russia as Americans musically. There is so much we can learn from those people over there and from that school, and from that discipline and from those techniques. We have to keep this alive. We have to keep this exchange alive. And this is the way we learn, the way we grow, and this is why this is special."

Friday’s concert marked the eighth anniversary of the collaboration between the Bolshoi Theatre and the Washington National Opera, which is an affiliate of the John F. Kennedy Center for the Performing Arts.

The two institutions have regular artist exchanges on alternating years as part of the program. This time the turn was for the young artists from the Bolshoi to come to the United States, and three of them came and trained for the past couple of weeks. Last summer, four of WNO’s Domingo-Cafritz young artists traveled to Russia, while in 2016, four musicians from the Bolshoi came to train and practice with American singers at the Washington National Opera.

Ainsley shared that the young musicians who came from Russia this year are incredible, and he will miss them.

"The Bolshoi sent us this year three of the most incredible young artists I’ve ever encountered really. We totally fell in love with them from the moment they got here," he said. "It will be so sad see them leave. It will leave a huge hole in our hearts. I hope they’ve enjoyed themselves while they’ve been here. Making art together, making music together, it is a difficult thing there is nothing that brings people together faster and more closely than doing that. It’s been such a joy… Art is a great unifier. It’s the thing that brings us together. We can all appreciate beauty, we can all appreciate music."

On Friday night, thirteen participants of this year’s exchange performed together at the Russian embassy following some two week-long joint training.

The program was concluded with one of most famous Russian romance songs Ochi Cherniye (Dark Eyes), which the artists sang all together.

Carmel, who is also founder of the Carmel Institute of Russian Culture and History, stressed that after the concert that a cultural dialogue is critically needed between Russia and the United States during the current difficult time in the relations between the two countries

Ainsley revealed that the exchange program may be expanded.

"Susan would like to add administrative component for program and see if we can have some sort of exchange where administrators can come and benefit from experiences here in America."

The joint US-Russian program, supported by both embassies in Moscow and in Washington DC, has a lot of benefits and helps Americans polish their singing techniques in performing Russian opera as well as helps Russian artists improve western opera techniques.