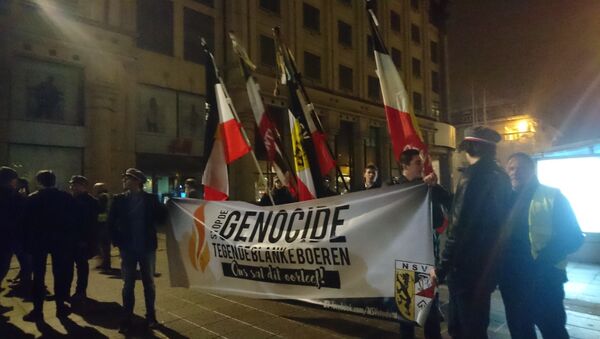 Denis Bolotsky
All materialsWrite to the author
Hundreds of activists from Ghent, Antwerp and other Belgian cities have taken part in a silent march against “the genocide of white farmers” in South Africa after a string of murders apparently targeting Boer and Afrikaner minorities. The participants say that the Belgian government should address the problem during talks with S African officials.

The silent crowd slowly marched through the streets of Ghent. Locals peered from their windows once they heard the drum beat and the police were nearby, stopping traffic in front of the parade.

White S African Farmers Claim 'Brutal' Attacks Amid Motion on Land Confiscation
On the flags there is Leo Begicus – the Belgian lion, but this time, students from several branches of the Nationalist Student Association – the NSV, are in the streets supporting their comrades, who live far away from European shores. They’ve gathered to protest against what they see as the genocide of Boers – a white minority living in South Africa, predominantly on farms. In recent years media have reported an increase in the number of murders and attacks on white farmers. Some South Africans, like Ilse De Beuckelaer, who studies in Belgium, says that she wants people to become aware of what’s going on in her country. The murders of farmers happen so often, that, according to De Beuckelaer, locals have almost stopped paying attention to such news.

"They are killing white people, they are abusing them for hours before they get help" – says Ilse – "Nobody deserves that."

It’s not coincidental that the help for South Africa’s white minority is coming from Belgium. The Flemish say there are serious reasons for them to protect the Boers in their time of need.

"We have a long common history, since a lot of South Africa’s farmers originated from Belgium and The Netherlands" – says NSV Antwerp spokesman Otto van Malderen. – “We speak almost the same language, and also at school we are taught about the culture of South Africa’s Afrikaners."

Even though, according to the organizers of the march, South Africa’s government refuses to admit that the assailants target primarily white farmers and their families, the statistics may prove otherwise. According to reports published by Africa’s independent fact-checking organization Africa Check, 1,544 people were killed in farm attacks in South Africa between 1990 and 2012 and only 208 of those murdered were black. 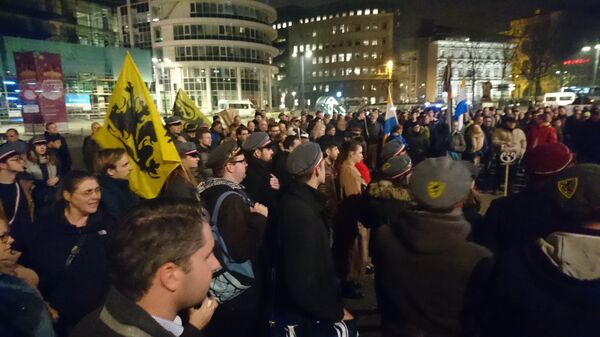 NSV activists say that it’s hard to see the full picture, since South Africa’s government tries to hide the information about the true scale of the “farm murders.”

"There are a lot of numbers, but they are put away as ‘unreliable’, since the government doesn’t want to publish the official numbers anymore, since the last couple of years" – says Otto van Malderen. – "So we are getting all the numbers from the Transvaal and other non-official sources."

According to Belgium’s Foreign Affairs service, for many years South Africa has been one of the country’s main trade partners in the Sub-Saharan part of the continent, especially in diamonds, energy and port sectors. And according to Belgium’s nationalist youths, this fact should be taken into consideration by the Belgian government. The NSV says that government officials should finally talk to their South African counterparts about the farm murders. And that, together with media attention, may eventually help in preventing such crimes in the future. 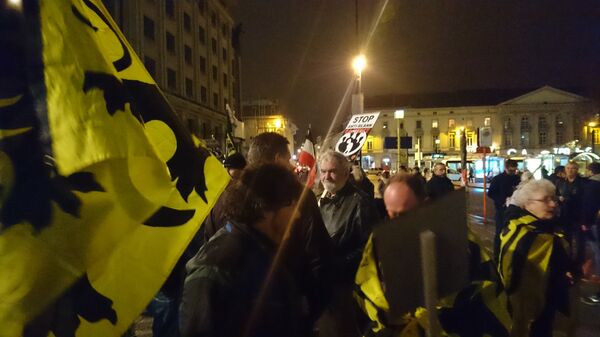 Members of the Belgian Nationalist Student Association organized rally in Ghent against what they call the genocide of white farmers in South Africa
© Sputnik / Denis Bolotsky
Newsfeed
0
Access to the chat has been blocked for violating the rules . You will be able to participate again through:∞. If you do not agree with the blocking, please use the feedback form
The discussion is closed. You can participate in the discussion within 24 hours after the publication of the article.
To participate in the discussion
log in or register
loader
Chats
Заголовок открываемого материала