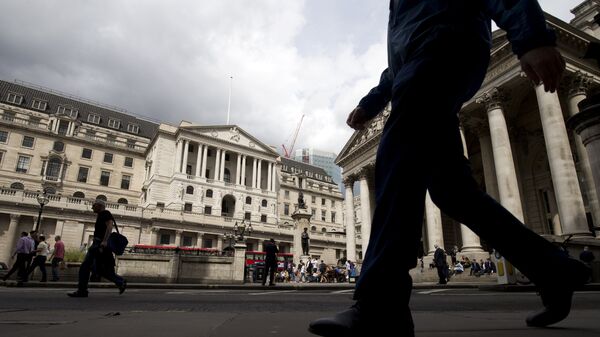 © AFP 2023 / JUSTIN TALLIS
Subscribe
International
India
Africa
The Bank of England (BOE) is expected to raise borrowing costs above their emergency levels for the first time since the global financial crisis erupted a decade ago – the move is anticipated as early as May, after the bank kept its benchmark rate steady during a Thursday policy meeting.

Kristian Rouz – The Bank of England (BOE) is signalling it could take another step to tighten monetary conditions as early as May, after keeping its benchmark interest rate steady several days ago. Policymakers say elevated inflation pressures due to the gains in wages, as well as more clarity in the Brexit process, allow for such a policy adjustment.

The BOE’s Monetary Policy Committee (MPC) said in its statement Thursday that it would keep the base borrowing costs at 0.5 percent, but more than one rate hike is likely this year. Two out of nine MPC members were backing a rate hike this month, but the majority voted otherwise, the Committee’s documents show.

"Modest tightening… could mitigate the risks from a more sustained period of above-target inflation that might necessitate a more abrupt change in policy and hence a greater adjustment in growth and employment,” MPC members Ian McCafferty and Michael Saunders said, backing a rate increase to 0.75 percent.

UK Parliament Urges Plan to Adjust Farming Sector to Brexit
This suggests the MPC is increasingly leaning towards moving the benchmark rate up, as UK inflation – while dropping from three percent in January to 2.7 percent last month – is still far above the BOE’s 2-percent target.

Prior to this past Thursday’s MPC meeting, observers had pointed to the BOE’s obvious pivot to policy normalization.

"The more hawkish members of the Monetary Policy Committee may vote for a hike as soon as Thursday, while we fully expect a majority to follow suit… on May 10," John Wraith of UBS said ahead of the MPC’s sit-down.

A rate hike in May would bring the UK’s base interest rates above their crisis emergency half-percent level for the first time since the global recession hit roughly a decade ago. The move would also reassure investors of the resiliency of the British economy amidst the rocky Brexit process, marred by concerns over a possible disruption of trade ties with the EU.

"An ongoing tightening of monetary policy over the forecast period would be appropriate to return inflation sustainably to its target at a more conventional horizon," the MPC said in its latest meeting’s minutes.

On the open market, British investors estimate the chances of a rate hike taking place soon at 80 percent. Additionally, the UK’s national currency – the pound sterling – has held firm above the lower threshold of its pre-Brexit referendum gauge of $1.41-1.60, strengthening to $1.41 Friday.

PM May: Scottish Economy Lags Behind Rest of UK Due to One-Party System
This compared to its trough of $1.16 posted shortly after the June 2016 Brexit vote, spurring inflation from some 1.5 percent to 3.1 percent last November.

Now that the pound has settled, and inflation remains high, it’s time for the BOE to take action.

"In short, a May rate rise remains all but certain, but the market had largely priced it before Thursday," said Ken Odeluga of City Index said.

The MPC also said key macroeconomic indicators, including inflation, wage growth, employment, and GDP projections, have been “broadly consistent” with the view of BOE Governor Mark Carney, who hinted a rate hike in May was “likely.”

The BOE also said the lack of spare capacity in the British economy – such as unused and underused industrial facilities and commercial establishments – means  inflation will remain above the 2-percent target for years unless the central bank tackles the issue.