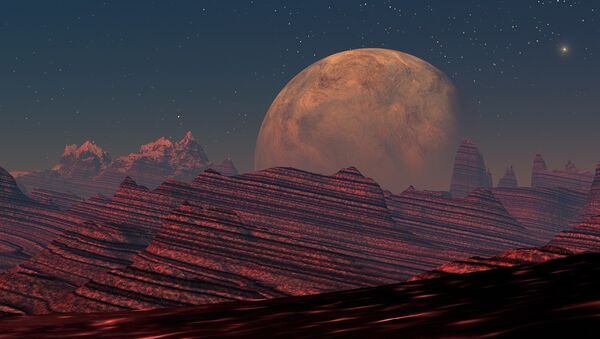 Cosmologist Peter Dunsby from the University of Cape Town in South Africa reported an unknown astronomical phenomenon, apparently very much excited about his new discovery. However, the event took a completely unexpected turn.

Peter Dunsby, a cosmologist from the University of Cape Town, "discovered" what he believed to be an unusually bright space object that turned out to be Mars.

The scientist shared his observations at ATel (The Astronomer's Telegram), an Internet service designed to quickly spread information about new space phenomena among astronomers.

In his message, Dunsby reported that on March 20 he had observed a very bright transient in the night sky next to the Triple Nebula and the Lagoon Nebula, which was missing at that place on March 8. The scientist also asked his colleagues to help him determine the nature of the object.

However, Dunsby soon realized his mistake, and 40 minutes after the first post he sent the second message, where he reported that the "discovered" transient was Mars, and apologized for the inconvenience.

For this "discovery" the researcher was awarded a joke certificate by The Astronomer's Telegram's Twitter-account.

Creating Mars on Earth: Israeli Scientists Prepare For Mission to the Red Planet
The scientist himself noted that his mistake was a good lesson to him, stressing that it's important to check one's observations many times before making any conclusions.

The incident had caused vivid reactions among social media users.

Most of them laughed at the incident and praised the scientist for displaying a good sense of humor over his mistake.

Lesson learned. Check check and triple check and then check some more!!

Happens to the best of us.:)

Genuinely the greatest discovery of the year. Exoplanets be damned. Now maybe we can terraform and colonize the ATel 11448 object, if we could only find a way to drive there. #Mars #Astronomy #Tesla #RocketMan

The beauty of #science is that when a #scientist makes a mistake, others do peer reviews and if there's a mistake, they simply share it, even have a cheeky laugh & then move on.#Religions or #ideologies, on the other hand, are always right, their leaders always righteous.