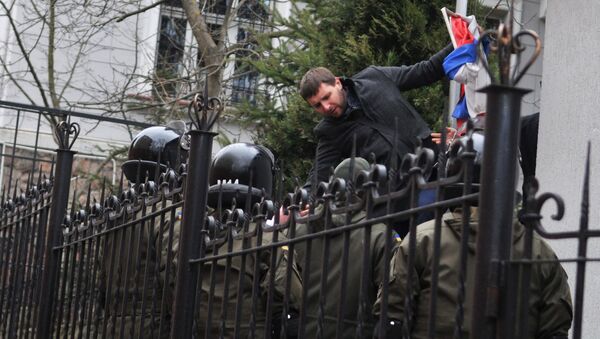 KIEV (Sputnik) - Ukrainian lawmaker Nadezhda Savchenko, who has been recently detained by Kiev authorities, announced a hunger strike during a court session considering the issue of her arrest.

"I am going on a hunger strike starting from today," Ukrainian lawmaker Nadezhda Savchenko said during the judicial hearing.

Earlier in the day, a court in Kiev started proceedings on the case of Savchenko. The Prosecutor General's Office of Ukraine has asked for two months in prison for Savchenko, accusing the lawmaker of the preparation of a coup and terrorist attacks.

On Thursday, Ukraine's parliament stripped Savchenko, who is accused of planning, recruiting, and giving instructions on how to conduct a terrorist attack on the parliament, of parliamentary immunity at the request of the Ukrainian Prosecutor General’s Office. She was later detained inside the parliament’s building and is facing from five years to life in jail.

In 2016, a Russian court sentenced Savchenko to 22 years in jail for being an accomplice to the murder of two Russian journalists in Donbas. During her arrest, Savchenko also held a hunger strike. Later that year, Russian President Vladimir Putin signed a decree to pardon her. Savchenko's imprisonment in Russia was widely criticized by the European Union and the United States, with the West calling her release a "milestone" in resolving the Ukrainian conflict.