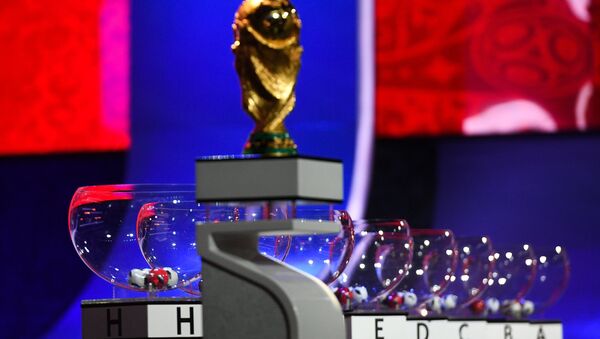 © Sputnik / Alexander Vilf
/
Go to the photo bank
Subscribe
The English football team is set to take precautionary measures to avoid poisoning at the World Cup held in Russia after the poisoning of former spy Sergei Skripal. The Sun reported that British football players will bring their own cooks. Sputnik discussed this with Dougie Brimson, best-selling author of books about football-related violence.

Sputnik: What's your take on these precautions, I think historically British football teams have gone to World Cups with their own cooks and their own food and culinary specialities, it's not so much of a surprise, is it?

Dougie Brimson: It's actually standard practice and I think the fact that someone on this side of the debate, the British or the English side, is making such a big deal, a scandal out of it, is proof of what I've been saying for an awful long time, there is a campaign going on surrounding English football to demonize Russian football and the World Cup and that’s all are seeing at the moment is just this relentless attack on Russia, it's outrageous. There's this big campaign going on here, but if you talk to most football fans here they don't buy this rubbish anyway, so I don't want Russian football fans or Russia to think that this is an entire country ranting on about this because it isn't, it is not true at all, we're not swallowing a lot of this rubbish.

Sputnik: A couple of weeks ago we had Labour MPs saying that the 2018 FIFA World Cup should be canceled all together and returned to another country, I know it's not going to happen that’s a joke.

What Will Happen if an 'English Football Brexit' Hits FIFA 2018?
Dougie Brimson: I've been on plenty of Russian media outlets saying, since the bid was awarded to Russia and not to England, warning from the outset that there would be a campaign by the English media to demonize Russian football in the hope that the tournament would be taken off of Russia and handed back to England and even at this late hour they are talking about it, if it was pulled from Russia, the only country with the facilities to host the tournament now would be England, and I've been saying this ever since the bid had been finalized that this would happen and it is going on and it is relentless.

Sputnik: As an author of several books about football-related violence how would you characterize Russian football, you've said you've been here many times, I'm sure you've got plenty of stories to share with us about the experience you've had in Russia and the enjoyment you've had traveling to this country.

Dougie Brimson: My experiences of Russia have all been brilliant. I'm an ex-military and I've served in the British military through a lot of the Cold War, so my first trip to Russia was nerve-racking to say the least, because you guys were the enemy, and to find that the exact opposite was true and to be welcomed in such a phenomenal way and I always am whenever I come to Russia and I get emails every day from Russian people. It's the most fantastic country and I've been banging on to everybody over here that, yes, Russia's got some problems, but in the main it's no different than if you travel to somewhere like Italy or Spain as long as you behave properly, as long as you play the game, as long as you do as you would at any other major tournament, you're not only going to be safe, you're going to have a fantastic time.

US-Based NGO Behind Anti-FIFA 2018 Campaign 'Supporting Arab Spring' Since 2011
Sputnik: Let's move on to this particular statement that Boris Johnson made where he went to such lengths as to say that Russian president is using the World Cup the way Hitler used it in 1936 for the Olympics, what are your feeling about such vociferous statements? Why is the politics getting increasingly intertwined with sport as we've witnessed with the Olympics? It's an outrageous statement really that the Foreign Minister has said and can only up to the bad feeling between the countries, can't it?

Dougie Brimson: I'm actually embarrassed that a British politician would say that about any other country, in particular Russia, we all know the history of Russia and the Second World War,  I'm actually embarrassed that a leading politician of my country made such a disgusting and disgraceful statement, and I'm not even going to bother apologize on behalf of my country because I hope most Russians know what a ridiculous statement that is.

Sputnik: What's your feeling in terms of this international consistent pressure Russia's enduring, in terms of the management of the country, Mr. Putin and Lavrov they are sharing great humility and restrain with regard to this constant barrage they are receiving, what's your take on it?

Dougie Brimson: I think you're right, I think they are handling it exactly as they should. They are under attack for something that they can't really defend, because my own views on what's happened in England if anyone goes to my Facebook page or Twitter feed they will know exactly what I think about all this. I think the Russians are handling it very well for now, but I think we're running a grave risk of making a very bad enemy and we need to take a step back and do some serious thinking, but as you say, I think if calm heads prevail Russia has got the opportunity to show that it is everything that our government is saying it isn't, that it's warm, friendly, fun and capable of hosting a fantastic tournament.

The views and opinions expressed by Dougie Brimson are those of the author and do not necessarily reflect Sputnik's position.

000000
Popular comments
michael, Not hand back, but handover....To many people have already made travel arraignments - airfare, hotels..... are the Brits willing to reimburse and subsidize all of that? I think not. There is zero chance of the world cup at this point being played anywhere but Russia.