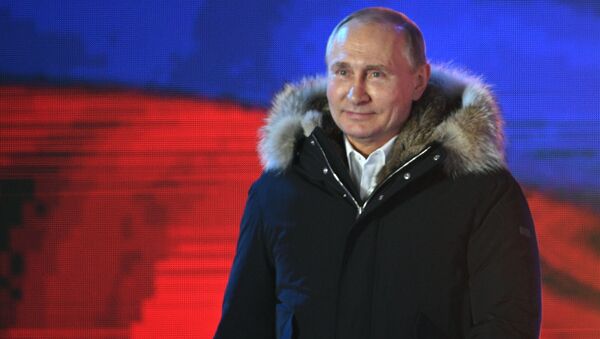 According to the document, 56,430,712 voters supported his candidacy.

Twitter on Fire As Russian TV Congratulates Putin on Winning 'US Election'
Communist Party candidate Pavel Grudinin is second with 11.77 percent of the vote, while head of the Liberal Democratic Party of Russia Vladimir Zhirinovsky has come in third place with around 5.65 percent of the vote.

Civil Initiative party candidate Ksenia Sobchak is in fourth place with 1.68 percent of the vote.

According to the Russian Central Election Commission (CEC) chairwoman Ella Pamfilova, the turnout at the Russian presidential election stood at 67.54 percent.

"As many as 73,629,581 voters took part in the election, which constitutes 67.54 percent of voters included in lists," Pamfilova said at a commission meeting.

According to Pamfilova, the elections were "free, competitive and transparent."

Each polling place in Russia had an average of five observers present during the March 18 Russian presidential election, with the total observer count this year reaching 356,000 people.

"Speaking about the observers who were present at polling places, their number amounted to 356,000, including 150,000 from civic chambers [deliberative bodies in the Russian federal subjects]. Another 105,000 members from [election] commissions in an advisory capacity and almost 15,000 accredited media workers [also acted as observers]. Therefore, an average of five observers [were present] at every polling place," Pamfilova said.

The Russian Central Election Commission (CEC) is planning to invite all presidential candidates, parties and political scientists to discuss the adjustments to the electoral legislation, chairwoman Ella Pamfilova said Friday.

“After the end of the campaign, we would like to invite all the candidates who participated in the elections, the parties that nominated them, their representatives, independent experts, political scientists and discuss what needs to be done to adjust our legislation so that it fully meets the current demands of society, given that there is already a working group on changing the legislation,” Pamfilova said at the CEC meeting.

000000
Popular comments
The percentage could have been higher considering that he was the only one candidate.
kurkku1962
24 March 2018, 09:05 GMT
000000
Newsfeed
0
New firstOld first
loader
LIVE
Заголовок открываемого материала
Access to the chat has been blocked for violating the rules . You will be able to participate again through:∞. If you do not agree with the blocking, please use the feedback form
The discussion is closed. You can participate in the discussion within 24 hours after the publication of the article.
To participate in the discussion
log in or register
loader
Chats
Заголовок открываемого материала
Worldwide
InternationalEnglishEnglishMundoEspañolSpanish
Europe
DeutschlandDeutschGermanFranceFrançaisFrenchΕλλάδαΕλληνικάGreekItaliaItalianoItalianČeská republikaČeštinaCzechPolskaPolskiPolishСрбиjаСрпскиSerbianLatvijaLatviešuLatvianLietuvaLietuviųLithuanianMoldovaMoldoveneascăMoldavianБеларусьБеларускiBelarusian
Transcaucasia
ԱրմենիաՀայերենArmenianАҧсныАҧсышәалаAbkhazХуссар ИрыстонИронауОssetianსაქართველოქართულიGeorgianAzərbaycanАzərbaycancaAzerbaijani
Middle East
Sputnik عربيArabicArabicTürkiyeTürkçeTurkishSputnik ایرانPersianPersianSputnik افغانستانDariDari
Central Asia
ҚазақстанҚазақ тіліKazakhКыргызстанКыргызчаKyrgyzOʻzbekistonЎзбекчаUzbekТоҷикистонТоҷикӣTajik
East & Southeast Asia
Việt NamTiếng ViệtVietnamese日本日本語Japanese俄罗斯卫星通讯社中文（简体）Chinese (simplified)俄罗斯卫星通讯社中文（繁体）Chinese (traditional)
South America
BrasilPortuguêsPortuguese
NewsfeedBreaking
10:30 GMTPremier League Matchweek 6 Preview and Predictions
10:19 GMT'I Explained Everything to Biden': Erdogan Reiterates Ankara Will Buy More S-400s From Russia
10:10 GMTCumbre Vieja Volcano Erupts on Canary Island of La Palma
10:09 GMTEpstein's 2009 Settlement With Virginia Giuffre Won't Save Prince Andrew From Litigation, Media Says
10:04 GMTFrench Armed Forces Confirm One Soldier Killed in Clashes in Mali
09:55 GMTEight Dead After Car Bomb Explodes Near Presidential Palace in Somalia, Reports Suggest
09:17 GMTMan Utd Manager 'Wouldn't Be Surprised' If Cristiano Ronaldo Still Played Football When He's 40
09:16 GMTTwo People Killed, 6 Injured in Explosion in Eastern Afghanistan, Source Says
08:46 GMT'Indian Press is Much Better Behaved': Biden Takes a Jibe at US Media During Meeting With Modi
08:24 GMTFBI Confirms Probe Into Alleged Attack on Female US Service Member by Afghan Evacuees at Fort Bliss
08:12 GMTOverprotected: Britney Spears' Father Monitored Singers Texts and Calls, New Documentary Says
08:09 GMTCanadian Catholic Church Apologises to Indigenous People for Abuse in Residential Schools
07:38 GMTWomen in Afghanistan Loved Fashion Until Taliban Took Over
07:22 GMT'Can't Get This to Function at All': 'Confused' Joe Biden Suffers Mic Malfunction at Quad Summit
07:19 GMTEuropean States to Remain US 'Underlings' Without Wake-Up Call After Paris Humiliated
07:18 GMTChina Warns US Will 'Dump' India, Australia, and Japan as Four Nations Convene for Quad Summit
07:14 GMT5.8-Magnitude Earthquake Strikes Ocean Off South Africa, USGS Says
07:03 GMTCNN Anchor Chris Cuomo Mum on Sexual Harassment Allegations Against Him
06:51 GMTUK Labour Party in Hot Water for Inviting Huawei to Conference
06:40 GMTBiden's National Security Adviser May Be Guilty of Perjury Over Clinton Campaign's Russiagate Plot