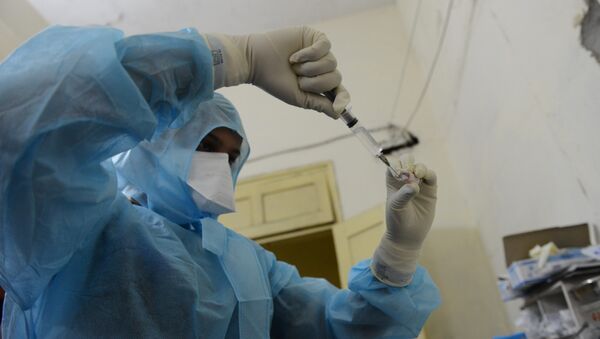 © AFP 2022 / SAM PANTHAKY
Subscribe
According to a WHO report released in January, India had about 2.79 million new cases of TB in 2016 and the disease killed about 435,000 people. Only about 1.3 million of them were known to be receiving treatment under the government’s TB control program.

New Delhi (Sputnik): In a drive to make India tuberculosis (TB) free, the Indian government has introduced a provision according to which chemists and hospital staff treating TB patients who do not give information to the health authorities about each and every patient that approach them could face up to two years in jail. The provision was introduced by the Indian Health Ministry through a gazette notification last week.

The notification also requires chemists and druggists to provide district officials with personal details and information on the medicines taken by TB patients to the health department without fail. However, health experts say the decisions could be detrimental to the fight against the disease in the long run.

"Fighting TB is a coordinated effort and in this fight, the chemists and the medical fraternity is an integral part. Legal procedures will further complicate the whole effort and discourage stakeholders from taking part in the effort," Dr. Samir Dalwai, leading public health analyst and member of the Indian Academy of Pediatrics told Sputnik.

Indian Tuberculosis Test Kit to Cut Cost and Time by 50%
We must also be aware of the fact that due to the random use of antibiotics, the number of TB cases reported to the government could be underreported and we are burdening our health system with drug-resistant tuberculosis. Hence, fighting antibiotics and their availability is a better way to combat the menace, he added.

A 2014 study in the peer-reviewed journal, The Lancet, reported that there were 2.2 million TB patients treated in India's private sector alone, or about 2-3 times higher than current estimates of the incidence of the disease.

Fighting poverty and unhygienic living conditions should be the priority of the government rather than thinking of punishing health professionals, Dr. Samir Dalwai added.

India has an ambitious plan to end TB in the country by the year 2025.