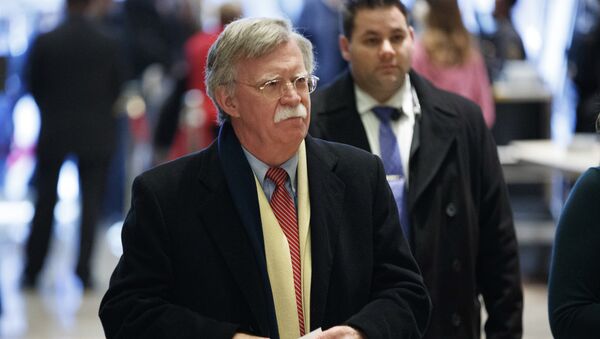 Sputnik spoke to Clodagh Harrington, a professor of politics at De Montfort University who focuses on US politics to find out more about Trump's new National Security Advisor John Bolton.

President Trump has announced that HR McMaster is to resign from his post as National Security Advisor and will be replaced by John Bolton, a Bush-era ambassador to the United Nations who is widely seen as having hawkish foreign policy views on issues from North Korea to the Iran nuclear deal.

Sputnik: So, to begin with, can you tell us a little bit about John Bolton, what are his views on some the major foreign policy issues of the day and how does he compare to HR McMaster?

CH: Bolton is an incredibly hawkish individual. I think he’s got a reputation for being a nationalist, a conservative, if you look back to his role during the Bush junior he was ambassador to the UN at a time when the country was embroiled in Iraq. He was a huge supporter of the war with Iraq and he played a large role in making it happen. If you look at the other hats that he wears, he’s a senior fellow at the American Eterprise Institute, which is a very conservative think tank, and a very influential one. He’s a Fox News commentator, so that obviously makes Trump happy. He’s also friends with the NRA, so he ticks so many conservative boxes. A lot of people will be happy with him coming on board, but obviously not everyone.

Sputnik: Mr Bolton is a well-known Iran and North Korea hawk – how do you see this impacting upon the upcoming talks between the US and North Korea and the future of the Iran nuclear deal specifically?

CH: The Iranians don’t like Bolton. They’ve called him in the past ‘rude’ and ‘undiplomatic’, so there’s obviously an adversarial relationship there before he even starts his new role. In terms of what might happen with the North Korea talks and the Iran deal situation, I think that between Bolton and Mike Pompeo there could be, not a shift in the Iranian issue because Trump is already not pleased about that, but certainly it could scupper this very unprecedented and unorthodox meeting between the North Korean leader and Donald Trump. Even Trump’s critics have acknowledged that this could be a major moment, but if he has Pompeo in one ear and Bolton in the other saying this is a bad idea, we need to be thinking about regime change, this could certainly derail any positives that might be coming down the road.

Sputnik: And finally, couple with soon-to-be Secretary of State Mike Pompeo, what direction do you see US foreign policy generally going in, ideologically speaking, under this duo?

CH: Well, like I said Pompeo and Bolton are both very much against the Iran deal. Pompeo is a former soldier who has said on numerous occasions that he thinks invasions and war and bombings can be really useful tools. So, the idea of somebody with that frame of mind being the chief diplomat is troubling for a lot of people. You have people like Rand Paul saying that this is not the mind-set you want for a Secretary of State and if you think that foreign policy is supposed to be, ideally, about things like universal values, shared goals with your neighbours and allies around the world. This kind of America first approach that Trump has is really anathema to that and it seems like Bolton and Pompeo would be very much promoting that America first approach by not taking the multilateral route. This could be just really damaging. They’re clearly not at all fans of the foreign policy direction that Obama took the country in. They are very much about regressing that, in Trump’s case maybe because he just genuinely didn’t like anything Obama did and the other two more because it just goes against their ideological world view.  I think there could be quite big changes coming down the road – but that’s assuming that they stay in their posts of course.