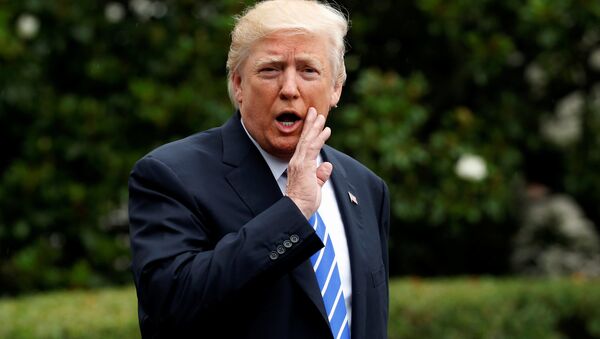 Donald Trump has lashed out at Joe Biden after he the former VP expressed a desire to "beat the hell out of him" for sexually assaulting women, warning that the Democrat "would go down fast and hard, crying all the way."
Trump has set Twitter reeling again, the US President's morning post pitted pro-Trumpers against Democrats with allusions to a schoolyard brawl with former VP Joe Biden.
Trolls rushed to mock the tweet by replying with pictures, many of them vocally wondering why the American President had started the day so early.

Others quickly replied that perhaps “watching TV” was not the hardest morning activity. There are, though, users who referred to Obama’s daily routine in response:

Also important to note that it's only 6:20am and President Trump is already up and hard at work. When did Obama start his work day as POTUS?

Pro-Trumpers immediately reacted by saying  it was high time that Biden get his just desserts for at least facilitating, in their view, Chinese access to US nuclear capabilities, reminding the public of the deal clenched by Biden’s son Hunter:

You could beat the crap out of Joe we all know that. Maybe you should. He stole millions in a secret back room deal with his son & John Kerry’s son. He may have even sold secrets about our nuclear arsenal to the Chinese.

Others naturally speculated on the failure of the Democrats in the latest presidential election, even coming up with an appropriate "electorate" for Biden:

One user attempted to psychoanalyze Biden’s "tough guy" words for Trump, saying that they were motivated by envy and jealousy:

JOE BIDEN IS TURNING INTO JUST ANOTHER OLD CRAZY JEALOUS BAST*RD LIKE JOHN McCAIN!!! HE NEEDS TO "STFU!!!!! pic.twitter.com/Djv6EC7LGy

Another user weighed in on the debate by adding that Biden’s bullying needs to be punished in line with US law.
Nevertheless, a whole choir of voices supported the former Vice President, saying the latter is fully capable of teaching Trump a lesson and even asking for tickets to watch Biden rough up Trump.

Mr. Biden, plz tell the US you didn't challenge the mentally-deficient that is "potus" to a street brawl. A: he'd lose. B: you forgot to sell tickets. C: you forgot to invite me! How could you? @realDonaldTrump
Thinks he's God. Joe, get crazy!!@JoeBiden pic.twitter.com/DvOWU0UOnQ

Some contributed still further by saying the US President mocks himself by issuing a warning to "tough nut" Biden:

HAHAHAHAHAHA!!!! #CadetBoneSpurs has NEVER been in a fight in his life. Don's the type to stand on a chair when he discovers a mouse, and has Melania kill spiders for him. What a laugh. I'll take Crazy Joe Biden over Fuckface Donald Trump any day of the week. https://t.co/9H1A9oAyvc

Interestingly, despite the general pro- or anti-Trump spirit, many users pointed to the lack of reason in both politicians' statements, saying Trump would be better off tweeting positive things and ignoring the everyday negativity:

You took the bait 👊

On Tuesday, Biden took the floor at an anti-sexual assault rally in Florida where he cited lewd comments Trump allegedly made in a 2005 "Access Hollywood" tape about grabbing women – something that the president himself denied outright.
The former vice president noted: "If we were in high school, I'd take him behind the gym and beat the hell out of him."
READ MORE: Twitter on Fire As Russian TV Congratulates Putin on Winning 'US Election'
Newsfeed
0
Access to the chat has been blocked for violating the rules . You will be able to participate again through:∞. If you do not agree with the blocking, please use the feedback form
The discussion is closed. You can participate in the discussion within 24 hours after the publication of the article.
To participate in the discussion
log in or register
loader
Chats
Заголовок открываемого материала