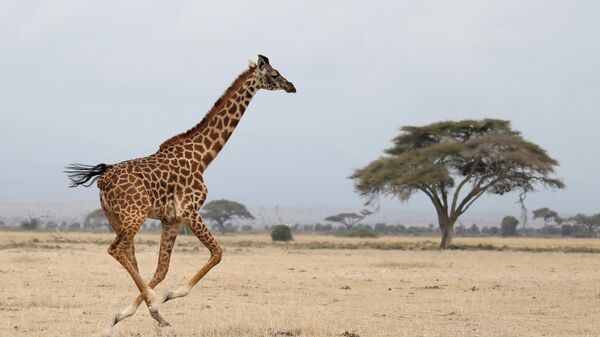 The recent death of the last male northern white rhinoceros on Earth and the US’ lifting its trophy hunting ban on elephants and lions has provoked many conservationists to shine a light on another creeping tragedy: the “silent extinction” of giraffes.

Trophy hunting, the recreational killing of wild animals for ornaments, has grossly contributed to the decline of the giraffe population over the last few decades. According to the International Union for Conservation of Nature and Natural Resources (IUCN), around 110,000 "mature" giraffes were estimated to be in existence in 1985, but the number had dwindled to a startling 68,000 in 2015 and continues to decline.

"Whilst giraffes are commonly seen on safari, in the media and in zoos, people — including conservationists — are unaware that these majestic animals are undergoing a silent extinction," said Julian Fennessy, co-chair of the IUCN's giraffe and okapi specialist group.

With the US being the largest known importer of animal trophies following expensive expeditions, many say banning trophy imports would help curb the population decrease of giraffes and other vulnerable or endangered animals.

"Currently, no US or international law protects giraffes against overexploitation for trade. It is clearly time to change this. As the largest importer of trophies in the world, the role of the United States in the decline of this species is undeniable and we must do our part to protect these animals," Masha Kalinina, international trade policy specialist with Humane Society International, said in April 2017 in support of a petition by five environmental groups to protect giraffes under the Endangered Species Act.

The petition, which called for the USFWS to provide endangered species protection to giraffes, is still languishing after its 90-day review process.

US President Donald Trump, whose two sons notably participate in big game hunting, recently lifted the ban on importing big game trophies acquired in certain African countries, as reported in a March 1 memorandum by the US Fish and Wildlife Service (USFWS).

Many argue that trophy hunting is beneficial to conservation due to the revenue brought in to states and reserves, but the IUCN clarifies that "effective governance and management" are necessary in order for it to have a positive and honest impact.

While habitat loss and local civil unrest remain at the top of the IUCN's major threats list for giraffes, all factors need to be considered in order to halt the "silent extinction" before trophy hunting and poaching of giraffes reaches the level threatening elephants and rhinos.