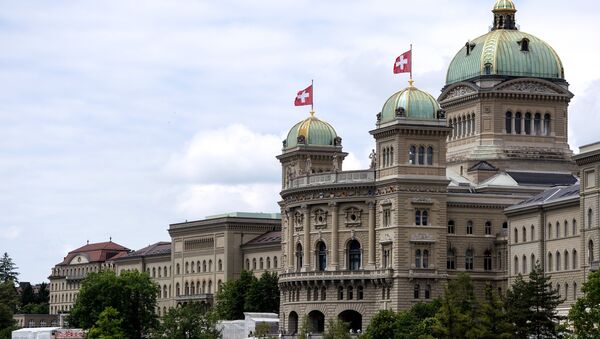 © Sputnik / Alexey Filippov
/
Go to the mediabank
Subscribe
International
India
Africa
Switzerland is dealing with an inquiry into possible violations by Turkish diplomats and intelligence, cautiously avoiding categorical statements. Speaking to Sputnik, a Geneva-based expert gives his opinion on the reasons.

The phantom of a diplomatic row loomed in Switzerland last week as the federal prosecutor confirmed investigating the failed kidnapping of a Swiss-Turkish businessman by two Turkish diplomats. They allegedly planned to drug the man and snatch him to Turkey because of his links to the attempted 2016 coup. The intended victim was linked to the movement of cleric Fethullah Gulen, which was blamed by Ankara for the failed coup attempt. This resulted in the inquiry that Switzerland launched into alleged foreign spying on the country’s Turkish community a year ago.

While Ankara denies all the “baseless allegations,” the Swiss State Secretary on Foreign Affairs Pascale Baeriswyl refused to impose any sanctions on Turkey, despite demands from the country’s parliament. According to her, officials can’t use diplomatic measures because it would defeat the ends of justice. Although she condemned the “absolutely intolerable methods of intelligence services,” she added “if the scheme is proved true.”

Reserved as a Swiss Bank

The Swiss reaction is strikingly different from the recent diplomatic row between Russia and the UK over the alleged poisoning of Russian ex-spy Sergei Skripal and his daughter. Alexandre Vautravers, an expert at the Geneva Centre for Security Policy (GCSP), told Sputnik, that the Swiss reluctance to escalate the scandal can be explained with Swiss thoroughness.

“It’s one of the Swiss diplomatic traditions – to be very attentive to the words before all the facts are clear,“ he said.
The expert stressed “It makes sense to be more cautious and not to hurry with conclusions before the inquiry is over. “

He reminded about the uneasy relations between Ankara and Bern after Turkish Foreign Minister Mevlut Cavusoglu’s visit was cancelled in March 2017 amid the reform of the Turkish constitution. The uneasiness is connected with the Syrian conflict. He said it resulted in a migration wave from the Turkey to Europe, which radical Islamists used to infiltrate Europe. Although Switzerland is not an EU member, it observes the Schengen agreement establishing a visa-free zone, as well as the Dublin Regulation, which deals with asylum seekers, Mr. Vautravers said.

Another reason for the reserved reaction is the latest 2017 amendments to the federal intelligence law, which gave new instruments to Swiss security agents and more freedom, the expert told Sputnik.

“We got wider discretion only not long ago,” he stated.

“The Turkish and Kurdish minorities in Switzerland are quite large,” Mr. Vautravers concluded, dwelling on other reasons of the reaction.