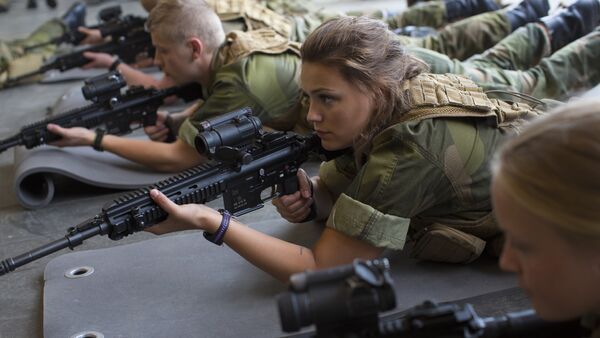 © AFP 2021 / KYRRE LIEN
Subscribe
Ever since Norway became the first European nation to introduce universal conscription, questions about the effectiveness of enlisted women have abounded. A new study seems to further fuel the debate about the 'weaker' sex in uniform.

A study by the Norwegian Defense Research Establishment (FFI) indicated that women's bodies tolerated extreme stress at least as well or even better than men's, Norwegian broadcaster NRK reported.

During the course of the demanding tests involving 23 male and 12 female soldiers from a paratrooper unit in the Armed Forces special command, men were found to have lost more weight than women. Furthermore, while men lost an average of 2.7 kilograms of muscle mass a week, women only lost fat. Lastly, men were found to need more time to recover the explosive strength of their legs.

"Women are better at burning fat during activity. This can be an advantage during long-term exercises or operations," FFI researcher Hilde Teien told NRK.

According to Teien, this is good news for women in the Armed Forces. Even though men clearly have a greater physical capacity, the difference can be somewhat mitigated by the fact that women don't lose muscle mass under extreme conditions.

While both male and female soldiers experienced a similar decrease in physical capacity after the exercise, it took men longer to get in shape again, which is presented as another argument for the fair sex.

"Afterwards, you have to rebuild to be ready for a new exercise or operation. It seems that women return their physical performance faster than men," Teien pointed out.

Another finding was that soldiers with less body fat lost the most muscle mass. According to Teien, this indicates that soldiers are better off with a higher fat percentage than athletes.

"In today's society, it's considered important to have a lot of muscle mass and little fat on your body. For soldiers, however, it is important to have more fat on the body. The ideal of being extremely slim and having shapely, defined muscles may not be ideal for the optimal soldier," Teien pointed out.

This spring, Teien and her colleagues are planning further gender tests on the cognitive ability of soldiers.

Colonel Lieutenant Harald Høiback, who previously sparked a debate by claiming that having women in the armed forces weakened Norway's fighting ability, was unimpressed with the study, which he dismissed as "only moderately interesting" for an operating chief.

"What's the relevance of women recovering faster if they are basically at a much lower level of physical capacity?" Høiback reacted.

Høiback also pointed out that the "guinea pigs" didn't go through the same ordeal, as no woman has passed the "male" admission requirements for the paratroopers so far.

"You may get the impression that these are small nuances, but if women are actually exposed to the same trial, they would not have met the toughest requirements," Høiback said.

​Norwegian ladies have been able to volunteer for military service for decades. In 2016, conscription was extended to Norwegian women, and they made up about 25 percent of the draftees. At present, the overall percentage of Norwegian women in uniform is about 17 percent of about 16,000 soldiers in peacetime, but is gradually increasing.