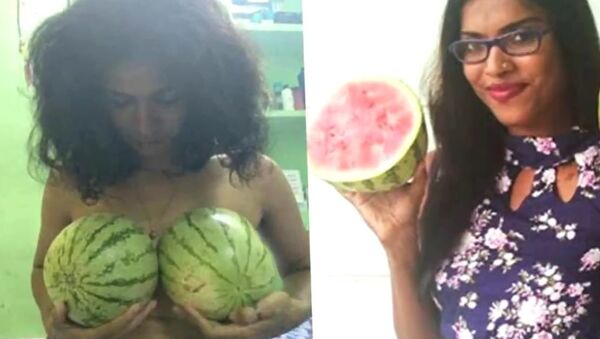 What are the most extraordinary or perhaps even outrageous ways to protest? How about protesting naked, while barely disguising your private parts with, say, a melon or perhaps a more exotic fruit? This is exactly what a number of women from the tropical Indian state of Kerela opted for.

The female students from Kerela, a state on India’s Malabar Coast, stood up against alleged sexist comments made by a college professor, who said women’s breasts look like melons and suggested that the fair sex in the college should hide them most carefully.

India-college students have taken to the streets with slices of melon to protest against a professor who said females weren’t covered properly. He said they were leaving a part of the body exposed that attracts men. #7thcenturyissueshttps://t.co/rIZXdZNgvt

The reaction was the contrary – the indignant students stripped to their waist and posed with melons for photos, which they shortly after uploaded on Facebook. Hours later, though, the campaigners woke up to find their accounts suspended and their pictures taken down.

Once again the obsession with the sexuality of women’s bodies… says more about the man and to his detriment.