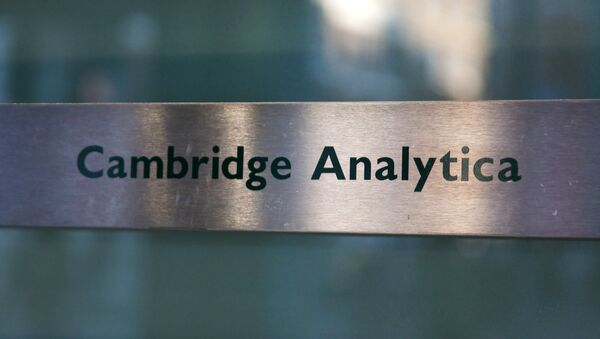 © AFP 2021 / Daniel LEAL-OLIVAS
Subscribe
The scandal pertaining to Cambridge Analytica's unauthorized access to millions of Facebook profiles has taken a new turn after this private UK company was accused of meddling in elections in Nigeria and St. Kitts and Nevis.

In 2015, an unnamed Nigerian billionaire paid £2 million ($2.8 million) to Cambridge Analytica in a bid to lure it into orchestrating a "ferocious campaign" against the country's opposition presidential candidate Muhammadu Buhari amid the re-election of President Goodluck Jonathan at the time, according to The Guardian.

Buhari managed to win the 2015 elections, but prior to that, Cambridge Analytica Chief Executive Alexander Nix allegedly instructed the company's staff to use Buhari's personal emails, which had been stolen by Israeli hackers.

After meeting the hackers in Cambridge Analytica's London offices, Nix reportedly ordered the staff to use the hacked information, including Buhari's medical records, in order to tarnish the presidential candidate's image.

"I'm 99 percent sure of that. Or if they didn't have his medical records they at least had emails that referred to what was going on," The Guardian quoted a source as saying.

Earlier, The Times reported that Cambridge Analytica's parent company, Strategic Communications Laboratories (SCL), targeted Caribbean politician Lindsay Grant ahead of the 2010 election in St. Kitts and Nevis so as to undermine his candidacy against the nation's Labor Party, claimed to be SCL's client.

At the time, Grant ran for the National Assembly of Saint Kitts and Nevis against Glenn Phillip and lost by 29 votes.

May: UK Gov't Has no Contracts With Cambridge Analytica or Parent Group (VIDEO)
Commenting on the recent scandal surrounding Cambridge Analytica, Facebook founder Mark Zuckerberg said on Wednesday that his company must take steps to prevent developers from misusing personal data through passing it on to third parties.

Last week, media reports said that the personal information of about 50 million Facebook users had been obtained without their permission by Cambridge Analytica.

The collected data provided researchers with information about peoples' political preferences, thought to have since been used to target ads for campaigns, including Brexit and the 2016 US presidential elections.