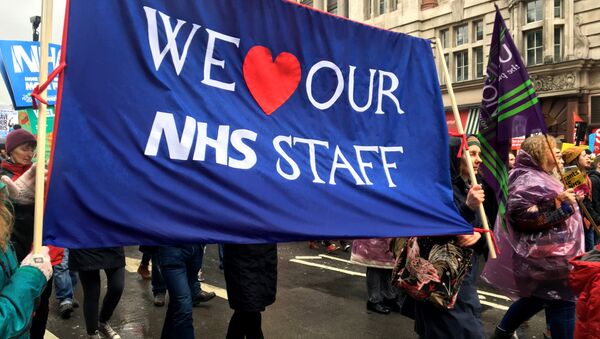 © Sputnik / Evgenia Filimianova
Subscribe
The British government has agreed to give a million National Health Service workers a pay rise for the first time in eight years. Sputnik spoke to an NHS nurse, Joan Pons-Laplana, who said he felt the unions could have negotiated a better deal.

After years of austerity the Conservative government of Theresa May has agreed to give NHS staff a rise of 6.5 percent over three years.

Unison, who are one of 14 unions representing NHS workers, announced the details of the pay deal on Wednesday, March 21.

The total deal will cost the Treasury about £4.2 billion (US$5.9 billion).

"The agreement means an end at last to the government's self-defeating and unfair one per cent pay cap. It won't solve every problem in the NHS, but would go a long way towards making dedicated health staff feel more valued, lift flagging morale, and help turn the tide on employers' staffing problems," Unison's lead pay negotiator for the NHS unions Sara Gorton said in a statement.

"Rarely has a pay rise been so deserved by NHS workers who have worked so hard," Health Secretary Jeremy Hunt told the House of Commons on Wednesday.

He said some staff would get rises of up to 29 percent but he said the deal involved productivity rises and would result in "better value for money" for taxpayers.

But Joan Pons-Laplana, a Spanish nurse who works in an NHS hospital, said he was not happy.

"What I find shocking is that they are trying to divide people. Some will gain but others will lose out. Although some people on the lowest pay bands will get 29 percent, many will only get 6.5 percent and when you consider that some forecasts say inflation could be 7.5 percent, that is effectively a pay cut," Mr. Pons-Laplana told Sputnik.

In 2010, when David Cameron became Prime Minister at the head of a Conservative/Liberal Democrat coalition, he introduced a pay cap on public sector workers, restricting their pay to one percent a year.

When Cameron shed his Lib Dem partners he stuck with the pay cap but after Theresa May lost her majority in last year's General Election rumors began to circulate that she was considering ending it.

There have been several huge marches and rallies in London and in other British cities by nurses and civil servants demanding pay rises.

Trade unions representing NHS staff have pointed out that with inflation rising year on year their members have actually seen their pay effectively cut over the last eight years.

Earlier this month the Chancellor of the Exchequer, Philip Hammond, hinted that austerity could be coming to an end.

It appears the NHS pay deal would be the first tangent sign of a change in the government's economic policy.

The Guardian revealed earlier this month that ministers, including the deeply unpopular Health Secretary Jeremy Hunt, had demanded that in return for the pay rise NHS employees would have to give up one day's holiday per year.

The Shadow Chancellor, John McDonnell, said the demand was "mean-spirited."

But this demand has now been dropped after hard bargaining by Unison, which represents the majority of NHS staff.

Should we REJECT or ACCEPT the pay deal that has been "leaked" to the media today?
(6.5% over three years in return for 1 days annual leave.)

​Unions to Recommend Deal to Members

NHS staff get 27 days annual leave and most would be loathed to give up even one day, considering how hard they work.

Mr. Pons-Laplana said he believed the idea of losing a day's leave had been a "red herring" which was designed to make the final deal look more attractive.

He accused the unions of selling out members and said they should have negotiated a deal which was above inflation for all NHS staff.

"Starting salaries will be higher and current nursing staff will reach the top of their pay bands much faster than before, without changes to their leave entitlement or unsocial hour payments. With this agreement, the government and NHS has acknowledged that the greatest rise in productivity will come from a healthy and motivated workforce," said Royal College of Nursing associate director employment relations Josie Irwin.

The 14 unions are to recommend the deal to their members at a meeting on Wednesday of the NHS staff council.

Their real-terms income has fallen by an estimated 14 percent since the pay freeze came into effect in 2011 and many union members want a bigger pay rise.

"Overall it's not a bad deal and it's in the right direction. I expect it will be accepted by union members. The people who will be worse off will be powerless to stop it," Mr. Pons-Laplana told Sputnik.

UK doctors and dentists have their own pay review body and are not covered by the NHS pay deal.