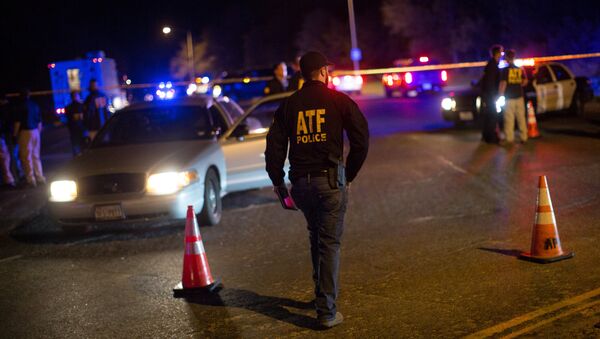 © REUTERS / Tamir Kalifa
Subscribe
International
India
Africa
A serial bomber who had been plaguing the city of Austin, Texas, was killed on Wednesday. Sputnik spoke to Clint McNear, a law enforcement consultant, who said the bomber probably became intoxicated by the fear he was able to spread.

Mark Conditt, 23, was traced to the Austin suburb of Round Rock in the early hours of Wednesday, March 21, and was able to detonate a device, killing himself, before he could be arrested.

President Donald Trump had described the bomber as "a very, very sick individual" a few hours before he blew himself up as police closed in.

Police are believed to have been given Conditt's name after they showed pictures, from a surveillance camera, of him delivering one of the bombs to a FedEx office.

JUST IN: Serial bomber, 23 year old Mark Conditt was intending to do more harm. Investigators say they found additional evidence that he was googling addresses in the Austin and Cedar Park area to send out MORE packages. #AustinBombings @KVUE

​'In His Arrogance He Made a Mis-Step'

"It was a mis-step. In his arrogance he changed his tactics so much from what were difficult-to-track deliveries early on and then he allowed himself to be identified by surveillance cameras," Clint McNear, a former detective in Garland, Texas, told Sputnik.

"Whatever his motivations were it's clear he was a sociopath who enjoyed engendering fear in the media and that may have led to his more frequent attacks which manifested themselves in his downfall. I think he just spiralled down and his mental illness ramped up quickly," said Mr. McNear, who is now a law enforcement consultant.

"I'm just shocked and thankful that there was not a greater loss of life. It's a miracle," Mr. McNear told Sputnik.

​Little is known about Conditt, who carried out four bombings, except that he was white and lived in Pflugerville, near Austin.

Some of the bomber's victims had been black or Hispanic, leading some media commentators to deduce that the bomber was racially motivated.

"It's not clear yet if this was a hate crime or domestic terrorism. It could be anti-government or against a certain race. But if you remove the agenda it's just a sociopath who is intoxicated on the power of creating fear," Mr. McNear told Sputnik.

AUSTIN BOMBING SUSPECT IS DEAD. Great job by law enforcement and all concerned!

The first bombings occurred as Austin was hosting the annual South By Southwest (SXSW) music, film and technology festival.

Conditt's death brings to an end his brief reign of terror. Other serial bombers have taken much longer to catch and have caused far more disruption and death.

The most notorious of all was the Unabomber, Ted Kaczynski, who targeted universities and airlines in the 1980s and 1990s.

He was eventually caught after his brother tipped off the authorities after recognizing some of the passages in his "manifesto", Industrial Society and Its Future, which he persuaded the authorities to print in the Washington Post.

Kaczynski was arrested at his remote shack in the backwoods of Montana and is now serving life without the possibility of parole in a supermax prison in Colorado.

"The Unabomber deployed a much more methodical delivery and a more patient selection of targets over the years. That was how he was able to avoid detection for so many years," Mr. McNear told Sputnik.

"Whether they are a serial bomber or a serial shooter, whatever level of comfort they have in their signature, when you take out their agenda you have a sociopath who enjoys power of causing fear and wreaking havoc. It was the same with the BTK Killer, the Beltway Sniper and the Unabomber," Mr. McNear told Sputnik.

Several Serial Bombers Now in Jail in US

Two of the country's most notorious serial bombers are serving life sentences in prison.

Thank you FBI. The Austin bomber, a 24 year old white male (therefore not classified as a terrorist) will no longer TERRORIZE Austin residents. #AustinBombing

​Walter Moody sent four pipe bombs in the mail to the federal appeals court in Atlanta, to a judge in Alabama, and to an attorney in Savannah, Georgia. Moody, 82, is on Death Row in Alabama and is due to be executed next month for the murder of federal Judge Robert Vance.

Eric Rudolph, who killed three people and injured more than 100 in a series of bombings of abortion clinics, most famously blew up the Olympic Park in Atlanta in 1996 but he was not caught until 2003.

The Austin bomber killed at Round Rock is a terrorist. Why aren't people saying it?? It was an ACT OF TERRORISM. That blonde white coward is what terrorism looks like. Call it for what it is. White supremacist terrorism.

​One of the most bizarre bombings in the US was the "pizza bomber" case in Erie, Pennsylvania in August 2003.

Brian Wells, who was wearing a locked "collar bomb" device, was killed when it was triggered remotely after he was forced to carry out a bank robbery.

Marjorie Diehl-Armstrong, 61, was jailed for life in 2010, two years after co-conspirator Kenneth Barnes pleaded guilty and was incarcerated for 45 years.