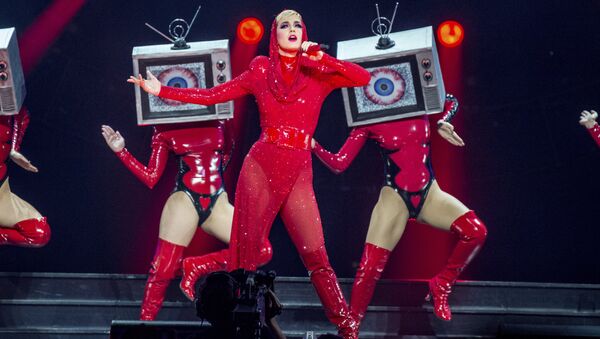 © AP Photo / Amy Harris
Subscribe
The Pentagon’s entertainment propaganda operations are expanding beyond Hollywood movies and TV shows to encompass almost every aspect of popular culture. One area where they are increasingly involved is pop music, teaming up with some of the biggest names in the music industry to produce pro-military music videos and singing-themed movies.

From pop stars like Katy Perry and Mariah Carey to indie rockers Michelle Penn and The Secret State, the Pentagon had supported a wide variety of recent music video artists. While many of these are country singers like Scotty McCreery and Craig Morton, they also provide assistance to musical reality TV shows and even for a live performance by Britney Spears in Las Vegas.

The most recent music project to have enjoyed large-scale military support was Pitch Perfect 3 – the third in the series of movies about the a capella singing troupe the Barden Bellas. In this final installment the Bellas are seen struggling for money and working in low-paid jobs so they decide to reunite for a USO tour. They travel to several US military bases in Europe to entertain the troops.

The film was shot on location at Dobbins Air Reserve Base in Georgia, which was dressed to look like Rota, Spain. A DODlive article notes how there were military advisers on set through large parts of the filming:

"Thomas Lesnieski, a retired Army lieutenant colonel and the former director of public affairs for the Georgia National Guard, says there were many 18-hour days on set, helping to scout locations and providing script reviews to make sure the military was shown in a positive light."

Air Force Capt. Meredith Kirchoff, who works in public affairs at the Dobbins base, revealed how they even used Airmen to serve as extras in some of the concert scenes. Kirchoff commented that the movie “was awesome, in that it really humanized some of our service members.”

the military is heavily involved in Pitch Perfect 3, it is subsidized for an ideological reason that has to do with a kind of psyops directed to a domestic audience. This kind of financial / ideological / script arrangement isn't 'politically neutral' or just 'technical'

In 1989 the producers of the video for Cher’s ‘If I Could Turn Back Time’ approached the US Navy looking for permission to film aboard the USS Missouri, and submitted their storyboard for Pentagon review. According to a Pentagon database several scenes were changed or removed by the DOD to try to de-sexualize the video, including one where “A chief rips a pin-up photo from the inside of a sailor’s locker”. The database entry goes on:

"DOD/Navy anticipated that Cher’s wardrobe would be outrageous, but never imagined it would be the vulgar, black leather thong-type of outfit that she wore. Of course, when she emerged from the dressing room it was too late. With Entertainment Tonight cameras present, it wasn’t possible for the DOD project officer to do anything but gulp"

In the end there was “much ado in the media, but no official complaints” and the Pentagon were very happy with what they saw as “$8 million in free MTV advertising” for the Navy.

For her single ‘Part of Me’, Katy Perry’s producers wanted the music video to tell the story of a young woman who splits up with her boyfriend and seeks solace and adventure by joining the military. Naturally, the Marine Corps were delighted to help, providing access to Camp Pendleton to shoot training sequences, and to amphibious vehicles.

Sputnik spoke with a currently serving female Marine who asked not to be named, who commented on the video:

"Before joining I thought it was something amazing and it was something that I would eventually be able to relate to. Looking at it now that I have some time in, it looks like entertainment."

The Marine Corps were delighted with the result. An internal report from their entertainment liaison offices notes how the video had racked up millions of views within two days of release and had been picked up by international media outlets:

"Marine Corps provided support to the production of a music video for Katy Perry at MCB Camp Pendleton 16, 17 and 24 February. The video depicts Ms. Perry leaving behind a past life and become a United States Marine. Viewed more than 4 million times on YouTube by 23 March and was covered in major media outlets in the US, Europe, Canada and India."

The views and opinions expressed in this article are solely those of the contributors and do not necessarily reflect those of Sputnik.
000000
Popular comments
This story reminds me of the "Comrad Detective" stories from cold war Romania.