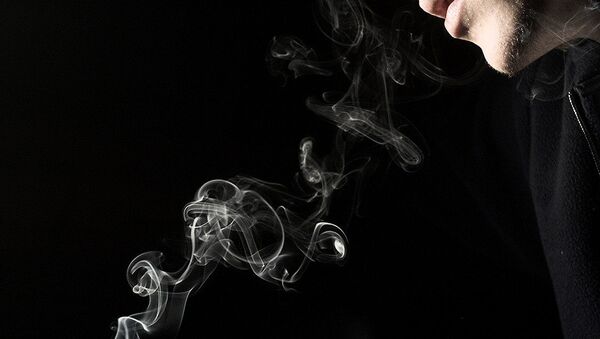 North Carolina police arrested a woman Wednesday and placed her baby into child protective services after a video of the child inhaling and puffing smoke when an off-screen adult places what appears to be a cigarillo to the baby’s lips went viral on Facebook.

According to Raleigh police, 20-year-old Brianna Ashanti Lofton was charged with two counts of felony child abuse: contributing to delinquency of a minor and possession of marijuana.

The baby has been placed with Wake County Child Protective Services and the mother sent to Wake County Detention Center, WRAL reported. It is unclear whether the adult in the video was the mother and whether the mini-cigar the baby was given contained marijuana, tobacco or another substance.

​The video was widely circulated across social media on Wednesday with comments urging law enforcement to take action.

​"Big thanks to everyone who posted information about the smoking mother and baby," Raleigh Police Department officials wrote in a Facebook post Wednesday. "Thanks to your willingness to get involved, the child is now safe and the mother is in police custody."

"We appreciate the public's help in this matter," Raleigh Police Department Lieutenant Jason Hodge said the same day, WRAL reported. "We welcome and encourage any assistance the public is willing to give us at all times."

Facebook user Rasheed Martin of Rochester, New York, whose post about the video prompted many others to contact police officials, said that he doesn't know the mother but first watched the video when a friend of his shared it.

"Once more and more people found out about this situation, they showed me a screenshot of her actual Facebook page," Martin said. "Then I later added it to the post so everyone could know exactly who… did that to the poor little girl."

Lofton has previously been charged with simple assault, simple affray and violation of pretrial release conditions.