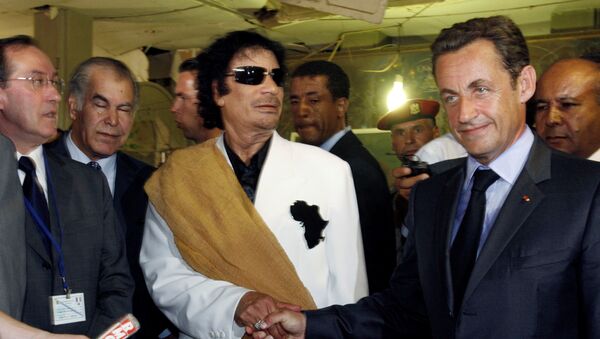 As the former French President is reportedly in police custody over allegations Gaddafi provided him with campaign financing, the interior minister under Sarkozy dismissed the idea, while his former party voiced concerns over the possibility of a biased attitude.

Claude Guéant, a close ally of Nicolas Sarkozy and former interior minister who was once General Secretary of the Élysée Palace, has rejected any possibility that his former boss’s election campaign was fueled by former Libyan leader Muammar Gaddafi. He stated in an interview with the French outlet France Info: “I Saw Not Even a 'Centime of Libyan Money'. However, he hasn’t commented on Sarkozy’s detention. The former president was charged with bribery, the use of an official position for personal purposes and with concealing a breach of state secrecy.

Meanwhile, the French center-right party “Republicans”, which Sarkozy led for many years, has called for the fair treatment of every citizen, regardless of his political position.

“We want to remind about the principle of presumption of innocence, which presides for all citizens. Members and supporters of the Republicans have the feeling again, that not all MPs or former MPs are treated with the same attitude depending on their political affiliation,” the statement on their web-site says.

Nicolas Sarkozy was the chairman of the party, named then the “Union for a Popular Movement”, in the periods from 2004 till 2007 and from 2014 till 2015, when he initiated the rebranding and other changes. He remained in the lead of the party up till 2016, when he left the post to compete in the 2017 presidential elections. However, he didn’t make it through the party primaries and eventually decided to give up politics.

Nicolas Sarkozy denies all allegations. He has been already charged with the illegal financing of his 2007 campaign by Liliane Bettencourt, the principal shareholders of L'Oréal, and detained by the police. But later the charges were dropped.

Sarkozy, who took France’s highest post from 2007 to 2012, was detained in Nanterre, France, according to media reports. He is preliminarily being charged with numerous irregularities over his 2007 campaign, including bribery and concealing a breach of state secrecy. In 2011 Gaddafi ‘s son publicly claimed the French president should admit he took money from the Libyan government.

The criminal case was opened in 2012 after the outlet Mediapart stated that Sarkozy got 50 million euros from former Libyan head of state Muammar Gaddafi  ahead of the presidential elections. The investigation had been suspended, however, till 2017, when the judge brought preliminary charges against the former president, stating that prosecutors had enough evidence to start the criminal process.