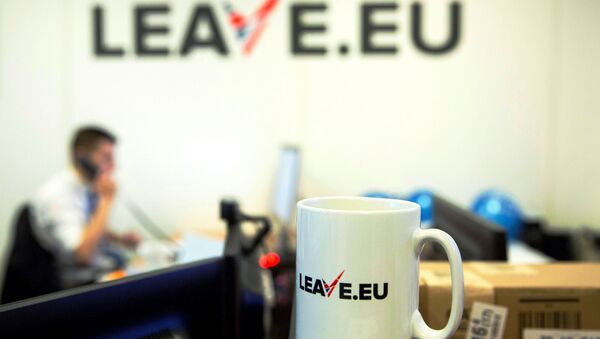 Cambridge Analytica, a leading data mining firm, has drawn controversy over its alleged role in helping elect US President Donald Trump in last year's presidential elections, and the company's supposed harvesting of tens of millions of Facebook users' personal data without their permission.

Businessman and anti-EU campaigner Arron Banks has insisted that the Leave.eu group – which he founded in mid-2015 – received a pitch from disgraced tech firm Cambridge Analytica, but didn’t agree to work with them.

"We did have dealings with Cambridge Analytica – they put forward a pitch that went into the designation document submitted to the electoral commission. We had plenty of talks with them but we never did any work paid or otherwise," Mr Banks was quoted as saying by the Reuters news agency this morning.

He also explained that because his group wasn’t chosen as the official campaign to push for the UK’s exit from the EU, there were no further discussions or any kind of collaboration with Cambridge Analytica.

"No benefit in kind, no data, no nothing," Banks responded when asked if Leave.eu used any of the firm’s services.

"If you want my honest opinion about Cambridge Analytica: it is a snake-oil story. In other words, I don't think they have this magical system that they say they have. I think they are nothing more than a company that places Facebook ads and shrouds in a sort of mystery," Mr Banks concluded.

In a secretly filmed video, the CEO of Cambridge Analytica Alexander Nix claimed that his data mining company helped elect US President Donald Trump. Via an official statement, Cambridge Analytica announced Mr Nix’s suspension and said his comments "do not represent the values or operations of the firm.”