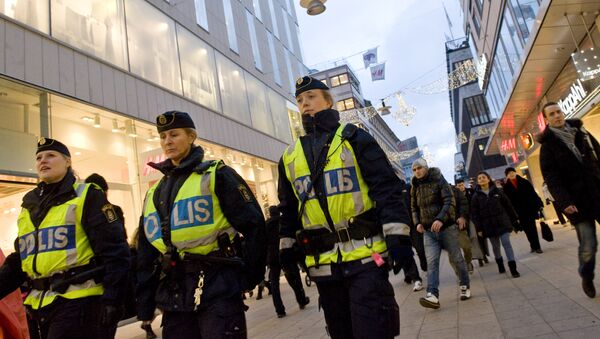 © AFP 2021 / JONATHAN NACKSTRAND
Subscribe
"I believe it's done for" is how Swedish rapper Ken Ring answered the question "What happened to the world's most harmonious country."

Norwegian national broadcaster NRK has run a program on "Swedish conditions," a recently-coined term for the worsening urban blight that has come to affect the neighboring country. Half-Kenyan Swedish rapper Ken Ring was invited to the studio, and he turned out to have a lot to say.

In the program, Ken Ring described how his country and his hometown of Hässelby in Greater Stockholm have changed since his childhood, making it sound like a devolution from an idyll to a dystopia.

"Today, there is an open gang war. My brother was murdered. I have 18 or maybe even 19 mates who were murdered. Today's Sweden is a different reality — today in Sweden, a completely different world," Ken Ring told NRK.

​When answering the host's question about the spike in shootings and gang murders, Ring went so far as to suggest that the posh areas will soon be walled off for better protection in the future. Ring said that he himself was lucky to earn enough money to move away from Hässelby, where many make their way selling drugs and weapons. According to Ring, the situation is almost hopeless for young people, unless they succeed as music artists or athletes. At the same time, teenagers who make about $1,200 a day selling drugs are not uncommon, though, he added.

Ring went on to suggest that the media and the authorities aren't doing enough to address the problems. "It seems like they've never set foot in Rinkeby, Hässelby or Fittja [ill-reputed areas known as ghettos or "vulnerable areas"], he said.

When directly confronted by the program anchor about the so-called "no-go zones," whose existence the Swedish authorities vehemently deny, Ring said that they indeed were real. According to Ring, the situation was in fact so bad that he had even considered moving to Africa, as things will only get worse in the future, he argued.

"Don't forget these six-year-olds about to start school today. There we have so many immigrants in the overcrowded suburbs, and they're just getting more and more. One day everything will crack," Ken Ring argued.

According to Ring, Africa might in fact be a safer place for children to grow up.

"It's safer. My nine-year-old son asked me 'Daddy, why is it more dangerous in Hässelby than in Nairobi, Kenya?' It gives you food for thought. I believe it's impossible to make any changes. I believe it's done for. I believe we'll have an open war on the streets of Stockholm 20 years from now," Ken Ring said.

Born to a Kenyan mother along with seven older siblings, Ken Ring is a prolific hip-hop artist and a father of five. In 2009, he sparked controversy by toying with the idea that Sweden arguably took in too many migrants.