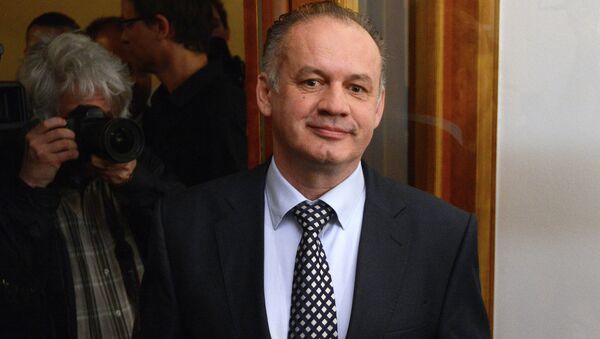 BRATISLAVA (Sputnik) - Slovak President Andrej Kiska on Tuesday refused to endorse the proposed cabinet and asked for a new list of potential nominations to address the political crisis.

"Today I have met with Mr. Petr Pellegrini, whom I entrusted last week with forming a new government of the Slovak Republic. I have told Mr. Pellegrini that I will not endorse the government as it was proposed to me yesterday. I also told him my specific reservations about his proposal. I asked him to propose a new list of the ministers by the end of the week," Kiska said.

Pellegrini has to convince people that the new government will bring about the expected changes and to create a stable government that will be able to calm the tense atmosphere in society, Kiska added.

On February 26, Kuciak, who had been investigating the Italian mafia’s activities in Slovakia and its links to senior Slovak officials, was found with his fiancee shot dead in their home. The assassination sparked mass protests across the country, with an estimated 50,000 people rallying in Bratislava and thousands more in other cities. The public has demanded a thorough investigation into the journalist’s murder and the resignation of the government.