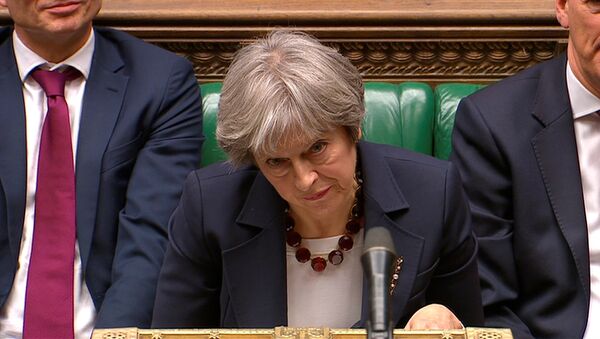 © REUTERS / Parliament TV
Subscribe
International
India
Africa
International experts from the from the Organization for the Prohibition of Chemical Weapons are due in the UK to assess the type of nerve agent used to poison ex-spy Sergei Skripal, as the UK continues to put the blame on Russia. Author and digital expert Rob Abdul told Sputnik that the current UK government isn't playing by the rule of law.

Rob Abdul: I think the first thing to know is that [the UK government] didn't really have a majority on the way in, which means that they are not really a full government as such. Having to have to buy support by paying a billion (GBP) to the DUP (The Democratic Unionist Party) suggests that they are on rocky waters. I think this current government isn't playing by the rules, as such. For instance, we have this poisoning that has happened; it concerns two

Poland May Join UK in Expelling Russian Diplomats Over Skripal Case - Reports
individuals, but then this government has also been linked with a landmark study that shows austerity has led to 120 thousand people losing their lives. Why aren't we doing something about that, why isn't the government pursuing that at all? In this country, we have something called British values and part of the tenets of British values is that we hold in high esteem the rule of law. That would suggest that someone should be given the right to prove their innocence. With this poising case that we've got going on, the Russians aren't even given access to the evidence, or anything to do with the photos. They don't even have [the opportunity to] comment. To say in parliament, basically, "be quiet and go away" [as the Defense Secretary Gavin Williamson told Russia last week]; that doesn't look like a government to me.

Sputnik: In the past week, we've seen Theresa May dedicate a lot of time, releasing a verdict in a matter of days that Russia is definitely responsible for this poisoning, this, in turn, has made her look stronger to many supporters and sceptics of her; a similar tactic was used in the 1980s by Thatcher to boost support via the Falklands War; is the PM using the Skripal case to boost her power in the Commons and her vision in the UK?

Rob Abdul: I would agree with that, I think she's trying to pick a fight, trying to make herself look good in front of the international community, when the reality is the Brexit negotiations are really going nowhere at the moment, and it's a fantastic way to distract the British public. I don't see our Prime Minister making such a fuss about the Grenfell disaster, 71 people lost their lives there, why wasn't the government up in arms about that? It's because it doesn't make them look good. I wholeheartedly agree that what Theresa May is doing here is just basically making a play at the international stage to show that she's a powerful person, that she can take control. When in fact she's not even following the rule of law in this country, which is innocence until proven guilty, just saying someone's done something — that doesn't cut it.

Sputnik: What actions would you personally like to see, what actions should we be seeing from a government that is actually powerful, that is doing a good thing for individuals and also abroad?

Rob Abdul: It really beggars belief. We purport to have democracy, we purport to be a civilized nation, we purport to be forward-thinking when, in fact, basically, we're reduced to a playground mentality: he did it, she did it, without any proof, or any just cause. A powerful government should rely on its democracy, on its rule of law and its processes and not just point the finger at someone just because it helps their cause.