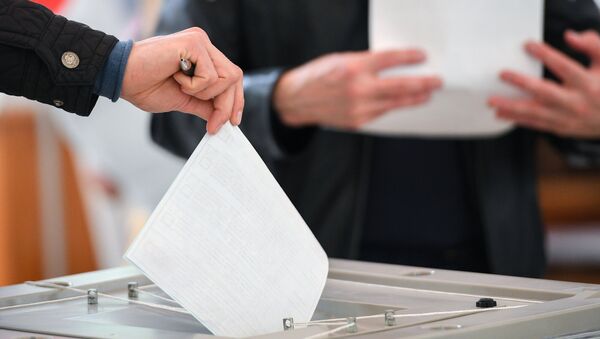 Dr. Binoy Kampmark: It’s to do with the nature of the beleaguered world; it's essentially the fact that there is a state of crisis. You have to remember the nature of politics now, in terms of its populism, in terms of the messages [which are] attractive in electoral matters, are demonstrated very well by Mr. Putin. I think you just have to look across at the United States' example with the message coming across with Mr. Trump then, how he won in 2016 and also the matters of  crisis associated [with that]. Be it, for example, with nuclear matters with North Korea, be it example with security matters, and be it of course in Russia’s own sense that Russia is designated as the villain, if you like, in any political instances, be it by the EU, be it by the US, be it by other powers. So it’s not surprising that in this particular case, Mr. Putin has done rather well, because in a sense it's been cultivated to suit him too, even by other powers.

Sputnik: Now the international community and the Western media were quick to denounce the vote, well I suppose that's been predictable in terms of the reaction; do you think there would be attempts to undermine the results of the election?

Dr. Binoy Kampmark: Well, there’ve always been and there is always going to be, of course, criticism about the nature of the results. I don’t think, I think we just have to face the facts that in order to have brought the result into doubt, you would have to have had, a closer race where candidates had actually have actually gotten a certain share, and that simply was not going to happen.  And yes, of course, there were irregularities and I think virtually even certain individuals in the Russian context will admit that, independent election monitoring group Gollus, for example, has noted various irregularities. These are the sorts of things that count in close elections but in the scheme of things it would  have been hard to have envisaged something more significant in terms of those irregularities.

Sputnik: What are your thoughts about how this relationship between these super powers can come to any sort of harmony? It's a very-very big question and it doesn’t seem there is a possible way forward at the moment, is there?

Dr. Binoy Kampmark: We have to look at the perspective of the United States, that you have a president who is actually more sympathetic to Mr. Putin than is comforting, even, for many of his inner circle, and certainly for some of the members of cabinet.  That when it comes to the agenda, in terms of how it going to be set, it's going to be at loggerheads, whether it be, for example, the latest Skripal case, or about how it plays out with relations. But the fact that Putin is there, the fact that he is a strong man, as it were, means that people have to deal with him whether they like him or not, and the fact that he’s made such an impression; the Russian influence in Syria, the fact that he is going to be a very important figure in the Northern Korean, South Korean and US discussion as well, not to mention China’s role. Many things are set to happen in which he has to play a role; that's undeniable whether people like him or not, its undeniable that he is going to be a crucial figure in the negotiations.

Sputnik: Trump, as you alluded to, is possibly pro-Putin, but he's surrounded by anti-Russian executives within his administration now. It all sounds very-very negative in terms of the way things are going forward. We’ve also got Mr. Trump boxed in by this Mueller investigation continuing to move forward or it doesn’t seem to be an ounce of that evidence. How it that going to further exacerbate the situation? It’s fascinating in many ways but it’s very-very concerning in the other direction, isn’t it?

Dr. Binoy Kampmark: I think the issue is simply how these particular individuals politically will survive, and I suppose Mr. Putin has demonstrated very clearly that he is an individual who is a survivor. He has worked and has an intimate knowledge of politics to the point of admiration, even by his detractors. The reality of it is that even in the context of the US there is instability; that’s the contrast, if you like, that Putin can demonstrate that he is very much in control of the reins and power whereas of course in the context of the White House it's a more complicated, tumultuous road ahead. So at a certain juncture, Mr. Trump and Mr. Putin will probably see eye-to-eye and do something on certain points. But the problem is the internal dynamics of US politics; [according to] the executives within and also within congress and within generally the US political scene Putin is anathema. He simply does not, you know, fit in the mold of a figure that they feel they can get on with, and, of course, he plays on this very well. His demonstration there, his discussion about indestructible nuclear weapons that could penetrate any missile shield, is a demonstration of that very point.

Sputnik: Now that Russia’s new military advances have been disclosed by Mr. Putin, will that change the landscape from your point of view, especially when it comes to the relationship that Moscow has with the United States? Are we taking about the beginning of a new arms race?

Dr. Binoy Kampmark: What’s happening now is, of course, Mr. Putin aimed very cleverly into this model of a more militarist world and making Russian security more apt with these weapons. But they were in the pipeline for a long time, and anyone who’s a watcher of this sort of thing would be aware that Russia is [doing this alongside] some other states: China and the United States. They are all involved in a modernizing drive that is making them more sophisticated weapons and placing less of an emphasis on the reduction of warheads and more on the modernization of forces. This is a theme that you’ll see not just from Russia but also from the United States and other powers that have nuclear weapons.

The views expressed in this article are solely those of the speaker and do not necessarily reflect the official position of Sputnik.
000000
Popular comments
Putin as a survivor? I think not, the President is a leader and survival is not the issue here.
michael
20 March 2018, 10:25 GMT
000000
Newsfeed
0
New firstOld first
loader
LIVE
Заголовок открываемого материала
Access to the chat has been blocked for violating the rules . You will be able to participate again through:∞. If you do not agree with the blocking, please use the feedback form
The discussion is closed. You can participate in the discussion within 24 hours after the publication of the article.
To participate in the discussion
log in or register
loader
Chats
Заголовок открываемого материала
Worldwide
InternationalEnglishEnglishMundoEspañolSpanish
Europe
DeutschlandDeutschGermanFranceFrançaisFrenchΕλλάδαΕλληνικάGreekItaliaItalianoItalianČeská republikaČeštinaCzechPolskaPolskiPolishСрбиjаСрпскиSerbianLatvijaLatviešuLatvianLietuvaLietuviųLithuanianMoldovaMoldoveneascăMoldavianБеларусьБеларускiBelarusian
Transcaucasia
ԱրմենիաՀայերենArmenianАҧсныАҧсышәалаAbkhazХуссар ИрыстонИронауОssetianსაქართველოქართულიGeorgianAzərbaycanАzərbaycancaAzerbaijani
Middle East
Sputnik عربيArabicArabicTürkiyeTürkçeTurkishSputnik ایرانPersianPersianSputnik افغانستانDariDari
Central Asia
ҚазақстанҚазақ тіліKazakhКыргызстанКыргызчаKyrgyzOʻzbekistonЎзбекчаUzbekТоҷикистонТоҷикӣTajik
East & Southeast Asia
Việt NamTiếng ViệtVietnamese日本日本語Japanese俄罗斯卫星通讯社中文（简体）Chinese (simplified)俄罗斯卫星通讯社中文（繁体）Chinese (traditional)
South America
BrasilPortuguêsPortuguese
NewsfeedBreaking
03:15 GMTUnited Russia Party Wins State Duma Elections With 49.82% of Votes
02:55 GMT911 Call Reveals Boyfriend Was Seen 'Slapping' Petito Two Weeks Before Her Disappearance - Report
02:31 GMTBiden Reaffirms Strong US-UN Partnership at Meeting With Guterres
02:22 GMTIndia Cuts Off Communications, Internet in Kashmir Due to Terrorists, Reports Say
02:12 GMTMember of CIA Chief’s Team Affected by ‘Havana Syndrome’ During Work Trip to India, Report Says
01:22 GMTClimate Change-Driven Cyclones Could be Regular Sights in Europe in 30-50 Years, Meteorologist Warns
01:02 GMT‘License to Murder Children?’ Psaki Panned for Bringing Up Biden’s Losses in Kabul Strike Answer
00:38 GMTMilley Told Admiral to Halt Operations in Pacific That China Could Deem 'Provocative', Authors Claim
00:11 GMTPremier League Goals of the Weekend
YesterdayMali Looks for ‘Plan B’ to ‘Bolster Our National Defense’ As French Mission Exits, Leaving Chaos
YesterdayGlobal Pandemic Caused Significant Surge in Demand For Black Bridal Dressers, Fashion Experts Say
YesterdayCoronavirus Death Toll Surpasses 1918 Influenza to Become Deadliest Pandemic in US History
YesterdayIran's New Defense Minister Says Enemies Will Get 'Crushing Response' - Report
YesterdayBorrell Expresses Regrets That EU Countries Were Not Invited to Join AUKUS
Yesterday‘Go Back to Mexico’: Shocking Video of US Border Patrol on Horseback Seen Whipping Haitian Refugees
YesterdayCDC Recommends Admitting Afghan Refugees 21 Days After Measles Vaccine, Reports Say
Yesterday26 GOP Governors Demand Meeting With Biden Amid Deepening Frustration Over Border Crisis
YesterdayDiscovery of Bats With Close Sars-CoV-2 Relative Add More Evidence to Natural Origins of COVID-19
YesterdayFull Harvest Moon Lights Up Sky Over Buenos Aires
Yesterday‘I Got Chills’: Travel Blogger Finds Video of Gaby Petito’s Van