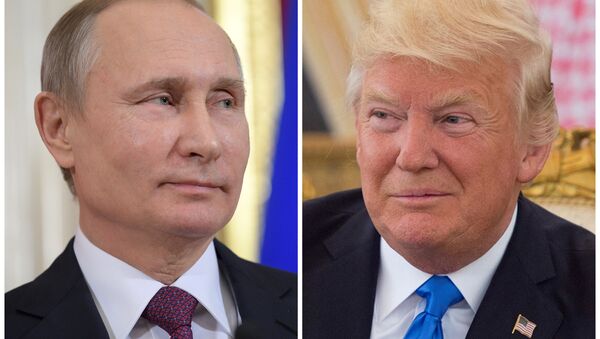 US President Donald Trump has congratulated Vladimir Putin on his win in Sunday's presidential election in Russia. In addition, the presidents held a phone conversation on a number of burning issues in world politics.

"The presidents spoke in favor of developing a practical interaction in various areas, including the issues of strategic stability and combating international terrorism. In particular, the sides emphasized the importance of coordinated efforts in limiting the arms race," Kremlin said, commenting the phone conversation held by Donald Trump and Vladimir Putin.

Trump congratulated Vladimir Putin on his victory in the presidential elections in Russia. The phone conversation took place at the initiative of the American side, according to Moscow.

Following the phone call Donald Trump said that he was going to meet with the Russian president in "not too distant future."

"We had a very good call and I suspect that we will probably be meeting in the not too distant future to discuss the arms race… to discuss Ukraine and Syria and North Korea and various other things," Trump said.

Kremlin characterized the conversation as "constructive" and "focused on addressing the problems in Russia-US relations."

During the phone call the agreement to develop further bilateral contacts was reached, taking into consideration a major reshuffle in the US State Department, Moscow noted, referring to the recent dismissal of Rex Tillerson from the post of State Secretary. Special attention was payed to the discussion of possible Russia-US summit.

The ties between Moscow and Washington began to deteriorate in 2014, in the wake of the crisis in Ukraine and subsequent Crimea's reunification with Russia, after which the US and its allies imposed several rounds of sanctions on Russia. Tensions between two countries have run high anew as the US closed Russian diplomatic compounds in San Francisco and Washington, DC, stirring up a diplomatic scandal.

Both presidents expressed their satisfaction with a certain decrease of tensions on the Korean peninsula, the Kremlin's press service said. In addition, Putin and Trump stressed the necessity to resolve the nuclear crisis by diplomatic means.

Recently, positive developments began to show on the Korean peninsula. Earlier in March, US President Donald Trump accepted the invitation to meet with Kim by the end of May following months of heightened tensions and exchanges of frequent military threats between the two leaders. Donald Trump said later that he expected "tremendous success" in solving the North Korean issue, saying that he expected Pyongyang to cease its ballistic missile and nuclear tests as well as denuclearize.

Russia welcomed planned contacts between the US and North Korea, however, some disagreements on the issue still remain between Moscow and Washington. On March 16, the US blocked a statement in support of the Korean peace process proposed by Russia and China at the UN Security Council (UNSC), which prompted Russia's bafflement. Afterwards, Russian Foreign Minister Sergei Lavrov said he was not ruling out that there would be no common position on the North Korea policy in the US after the departure of Rex Tillerson as secretary of state.

On Ukraine and Syria

Vladimir Putin and Donald Trump discussed in phone talks the situation in Syria and Ukraine as well as bilateral economic cooperation, including in the energy sector, the Kremlin press service said.

"The Syrian problem and the internal Ukrainian crisis were discussed. Both sides stressed the need to achieve expedient progress in their resolution," the press service said in a statement.

According to the statement, Putin and Trump also exchanged views on the issues of economic cooperation.

"The leaders expressed interest in giving it a new impetus. The energy sector was discussed separately," the statement said.

"We want to continue to have dialogue with Russia, continue to talk about some of the shared interests we have, whether it is North Korea, Iran," White House Press Secretary Sarah Sanders said in a briefing following the presidents' phone talks.

Sanders said no specific plans have been made for Trump and Putin to meet, after the US president said earlier on Tuesday he might have a meeting with the Russian leader in the near future.

US Senate Intel Panel Releases Recommendations Regarding 2016 Russian Meddling
The press secretary said the Trump administration would maintain a strong position with Russia when necessary, including by imposing sanctions and opposing Moscow's activities in Ukraine.

Sanders said during Tuesday's briefing that Trump and Putin did not discuss Russia's alleged election meddling in the 2016 US presidential election or the poisoning of former Russian intelligence officer Sergei Skripal in the United Kingdom. Russia has repeatedly denied interfering in the US vote.