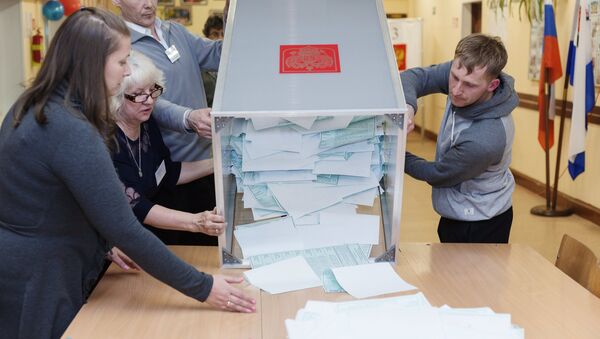 © Sputnik / Alexander Piragis
/
Go to the photo bank
Subscribe
Radio Sputnik discussed the 2018 Russian presidential election with Dr. Robby Schlund, member of the Bundestag and an international expert from Germany, who was observing the election.

Dr. Robby Schlund: It was the first time in Russia and observed the election. It was very interesting to see a very good professional organization and we have seen the new electronic ballot boxes. It was very nice to see this very good technique and it was a very good impression for us.

Sputnik: Could you, please, tell me, what an observer’s routine is? What does an election observer do?

Dr. Robby Schlund: At first, I would like to say it was very interesting, it was a very heavy poll and we had a lot to do. What we did – in the first, we from the AfD we think about the neutrality and it’s that we had to look over transparency, regularity and the democracy of the election. That’s the first step and then we had to control – we had to control the ballot boxes, we had to control that the figures were all good, and we had to speak with the workers there. What we have seen, it was very well organized and it was more regular and we have seen the lists how many people would like to come in the ward; it was very interesting. The other thing we also had a few in the next rooms because it’s very interesting, they were all clear, no problems, only for tea or coffee and had a little bit to work for copies. It was a very good organization. In my opinion, it was a very transparent election and all the time we had the possibility to go to all wards and every time we had the possibility to have a look at every room. It was no problem, no problems with people saying it’s not possible, you cannot go in this room or to this table, it was all possible, it was very good work together.

Sputnik: Were you able to talk to other observers? Did they share your impressions, your positive impressions?

Dr. Robby Schlund: Yes, it was possible. In our group we had one representative of the Parliament of Jordan and we have spoken about the differences of elections in Germany, in Russia and in Jordan. And it was a very favorable and interesting view about the Russian elections and, in our opinion, we say it was very transparent and it’s not right the other media said it wasn’t correct, because we had the possibility to go in all schools or in all buildings where the people gave their votes for the election.

Sputnik: More than 15 hundred foreign observers were accredited to monitor these elections in Russia and this points to the fact that this issue of transparency was taken by Russia very seriously. So, do you agree with this?

Dr. Robby Schlund: Yes, absolutely. We agree with this and our group, we said that it was very interesting to see, it’s very transparent and we think that the electronic ballot boxes work very proper and without big problems and I think it’s a good idea also to do it in Germany with these electronic boxes. It’s a very good idea.

Sputnik: What is your impression of the atmosphere there; the voter turnout and the general atmosphere?

Dr. Robby Schlund: There was a very good atmosphere and outside there were possibilities to drink tea or coffee, for the children – a playground, it was a very good organization all the time.