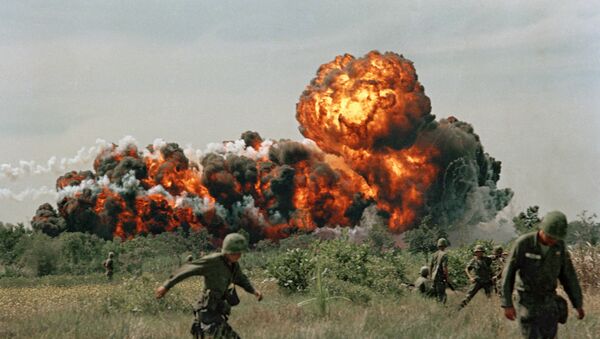 Vietnam marked 50 years since the My Lai massacre. On March 16, 1968, US troops killed 504 people in Son My, in an incident known as the My Lai Massacre, the worst recorded US war crime in Vietnam. The commemoration ceremony was attended by survivors, their families, and some 60 US Vietnam War veterans.

Sputnik discussed this with Dr. Gregory Daddis, associate professor of history and director of the graduate program in war and society at Chapman University in California. A retired US Army colonel, he has served in both Operations Desert Storm and Iraqi Freedom. Dr. Daddis specializes in the history of the Vietnam Wars and the Cold War era.

Sputnik: How significant is the fact that US veterans participated in the commemoration ceremony for the My Lai massacre?

READ MORE: Former Vietnam PM Credited With Raising Nation Up After US Invasion Dead at 84

Dr. Gregory Daddis: I think it is fairly significant, as we heard in the opening piece the forgiveness is an important part of reconciliation between the Americans and the Vietnamese. I think forgiveness is also, ultimately, how we achieve peace, so the fact that US veterans participated in the ceremony; I think what it does is, it helps us move the storyline away from an American-centric narrative and to see that it wasn't only Americans that suffered during the Vietnam war. I think many Americans for obvious reasons focus on the American experience in Vietnam, but I think when we consider the physical and spiritual effects that this mass killing had on the Vietnamese I think it is important and certainly significant, in terms of how we commemorate those that died.

Sputnik: How has the US view of the Vietnam War and Vietnamese veterans changed over the years up until this point?

Dr. Gregory Daddis: Americans have I think, more embraced the veterans that served in Vietnam, I think there was a conflation of contesting American foreign policy and then putting that on the veterans in the late 1960's and early 1970's, and I think we have certainly evolved from that and separated foreign policy problems with the American approach in the Vietnam war the veteran experience. I think that's been an important part of reintegrating those veterans back into society. I think as the society learned the lesson, in a sense, of how we embrace our veterans back from war, and from my personal experience I benefited from that process of learning, so you see some very explicit differences of how society treated its veterans in the late 1960's and early 1970's and how they have done today.

READ MORE: 'It was a Rampage': My Lai Massacre 50 Years Later

Sputnik: Do you think we'll see some ceremonies held in Iraq, in other places where the United States was involved in the military action?

Dr. Gregory Daddis: I think that depends on how we reconceive our relationship with Iraq, but if you think about the Vietnamese experience, that re-conception of the relationship between the United States and Vietnam really depended upon the courage of some Vietnam War veterans here in the United States that were in positions of power to rethink what Vietnam meant, so if you think about Vietnam veterans like Senator John McCain and Senator John Kerry, they believed that Vietnam could be a place not just a war, so they basically reconcieved what Vietnam meant for the American public, and I think we'll have to do something similar with Iraq,  to see Iraq as a place where people live rather than a war where Americans have fought.

Sputnik: Do you think these kinds of events can possibly work towards preventing US-led wars in the future?

Dr. Gregory Daddis: I would hope so, but I might be a little optimistic. Any opportunity to reach beyond our borders and to relate with other peoples and other cultures is certainly welcome and I think important in terms of how we see ourselves relating to the rest of the globe and I think for these events to hopefully have an impact in terms of preventing US-led wars, we as a society, in a sense, have to kick our addiction to war. We still see the military tool as a primary means of our foreign policy, and so for us to move beyond that we have to rethink our foreign policy and, in a sense, the militarization of that policy.

Sputnik: In your view, what is the most important lesson that can be learned from the war in Vietnam and other wars the US has been involved in more recent years, in Iraq, in Libya, in Afghanistan, what can you say?

Dr. Gregory Daddis: In short, that there are limits to American power, and that is uncomfortable for some Americans to consider. It is an uncomfortable proposition, but I think the Vietnam experience for Americans demonstrated that there was this misplaced faith in a war to have the capacity to transform societies abroad. We'd hoped that through war we could help South Vietnam transform into a stable non-communist, democratic state and, clearly, we fell short of those goals. So I think it is an important perspective from the Vietnam War for Americans to consider the limits of military power in foreign policy and hopefully to have a more holistic approach to our relationships with the rest of the world.

The views and opinions expressed by Dr. Gregory Daddis are those of the expert(analyst, speaker) and do not necessarily reflect those of Sputnik.