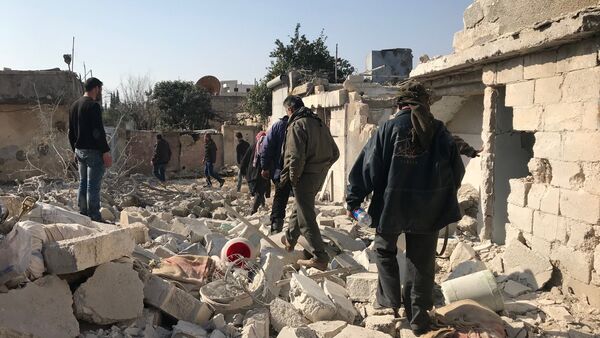 © Sputnik / Mikhail Alayeddin
/
Go to the photo bank
Subscribe
According to the Syrian Foreign Ministry, Ankara's seizure of Afrin in the course of its Olive Branch Operation in Syria violates the principles enshrined in the UN Charter.

Damascus has stated that Turkish Forces in the Syrian northern enclave of Afrin are "illegitimate" and demanded "invading forces withdraw immediately from Syrian lands they have occupied."

The foreign ministry's statement comes the day after Turkish President Erdogan claimed control over the Kurdish-held city of Afrin. Earlier, Erdogan's press secretary Ibrahim Kalin had stated that Turkey was not going to hand in control over Afrin to Damascus.

Turkish Army Seizes US Arms Left by YPG 'Terrorists' in Afrin - Deputy PM
On March 16, the Tukish president vowed to clear the territory from the eastern bank of the Euphrates in Syria up to the border with Iraq of terrorists, after it does the same in Afrin and Manbij cities.

The United States, in turn, announced later today that it will take measures to ensure deconfliction with Turkey in the Syrian town of Manbij, Pentagon Director of Defense Press Operations Col. Rob Manning told reporters.

Damascus has repeatedly condemned Ankara's operation as a violation of Syria's sovereignty. Turkey jointly with the opposition Free Syrian Army forces, launched Operation Olive Branch in Afrin in order to "clear" its border with Syria from terrorists. Turkey considers the Democratic Union Party (PYD), a Kurdish political party in northern Syria, and the Kurdish People's Protection Units (YPG) militia to be linked to the Kurdistan Workers' Party (PKK), listed as a terrorist organization by Ankara.

Turkish Operation in Afrin
© Sputnik
000000
Popular comments
The opportunistic Turdish nomads finally learned their lesson, but too late and at the price of losing it all, even the Syrian mountains they used to flee to. If they had accepted Syrian central Government authority and handed back the oil wells and other stolen Syrian property, Syria and Russia would've protected them and secured their status. Now the the medieval Turkish goat-molesting cutthroats are looting it all sending the valuables to Turkey proper and the despicable Turdish nomads, wildly unpopular within the Syrian society, reluctantly hosted by Syria will be begging on the streets of Damascus. Nobody like backstabbing opportunistic rats. Now it depends on were Erdogan goes next. If he goes to Manbij it's all fine and according to the overall plan but if hubris and neo-ottoman delusions rules his decisions he will go further south. In that case the NFZ for Turks will be up again and bombs will (again) be dropped on their advances until the retard gets the message.