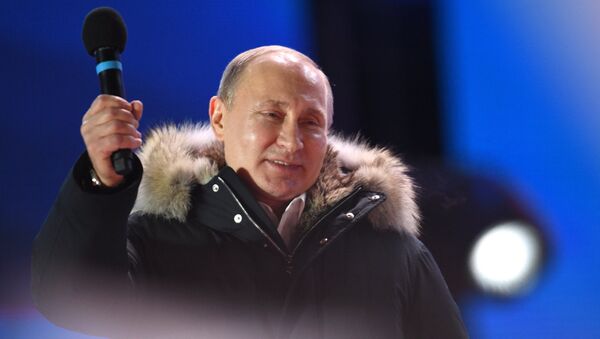 Nicolai Petro: It looks like a resounding victory for Vladimir Putin that’s not surprising. The interesting part will be the extent of participation of the electorate and that, too, looks high which adds a certain confirmation to the popular decision in his favor.

Sputnik: How do you see the international community reacting to the elections?

Nicolai Petro: Well, I would divide the international community into a core group of hostile countries, countries that are hostile to Russia, previously that might have been led by the United States, but Britain seems to be taking a new leadership role in that group, a group of countries that are close to an allied with Russia and neutral countries. So, each of them will respond differently. Those countries hostile to Russia will highlight what they call irregularities and will generally try to diminish the significance of Putin’s reelection, although inevitably they’ll have to deal with him as the elected leader. Supporters and those groups, countries that are neutral will generally welcome this, because this will lend to the general stability, I think, of Russian policies.

READ MORE: Putin Receives Over 76.6% of Votes as Over 99% of Ballots Counted — Election Commision

Sputnik: And so, what is your prognosis about, what do you think we’re going to see during this next term of Vladimir Putin? It’s a very difficult time for Russia right now.

Nicolai Petro: I might disagree with you a little bit. I don’t think this is anything new. In other words, the hostility evinced by Western countries has been consistent over many years and I would give as an example simply the sanctions policy. There has never been a time since 1948 that sanctions of one kind or another have not been imposed on either the Soviet Union or Russia. So there’s been an overall continuity. In that context I don’t expect things to really be any dramatically different. They will continue to be periodic scandals in the relationship; I don’t see it being transformed either for good or ill just because leading Western countries that are hostile to Russia are going to pursue those policies. Now there are going to be, I think, with Putin’s reelection and probably in very short order this year and over next year, there’s going to be a backlash against this hostility, as it is proven to not be able to change Russian policy.

And the argument has always been in favor of those who argue for sanctions and say we need to actually punish Russia and make her pay a price. These policies will lead to some result; they will actually make Russia change its course. And to the extent that this does not occur, it encourages those in the West who call for a review of policies and attitudes. Those voices are actually much stronger now than they were three or four years ago. After looking at the results, specifically, of the German and Italian elections, where groups that have generally been skeptical of hostility toward Russia have gained a great deal, a considerable weight in parliament.

World Leaders Congratulate Putin on Re-Election
Sputnik: How do you think we are going to see the development of European rhetoric toward Moscow and what, if any, changes do you think we can expect as far as the Ukrainian crisis?

Nicolai Petro: The Ukraine is entering, they’ve already entered, I would say, its electoral cycle. A lot of the recent detentions of people associated with the Minsk accords, I’m talking about the arrest of General Ruban, the anticipated detention of Hero of Ukraine Savchenko and, more importantly, the broader constituencies in the opposition that are linked to them, people like Yulia Timoshenko and Viktor Medvedchuk are going to be. The current regime in Kiev is going to try to tarnish all of the opposition and try to cast all of the opposition to the current presidency as simply agents of the Kremlin. That process has already begun in anticipation of what will probably be elections in March for the presidency and then in the early fall in the Ukrainian parliament. So, I foresee even greater hostilities, greater tensions and greater popular suffering, I would say, in Ukraine as the economic consequences of cutting off ties with Russia increasingly burden the Ukrainian economy.

Sputnik: Right before the elections, Putin came out with his State of the Nation speech and he talked about Russian weaponry. Do you think we are going to see a NATO build up after this and are be basically about to start a new Cold War?

Nicolai Petro: I think we’re already in a new Cold War, rhetorically. There doesn’t seem to be a direct relationship, I think, to the kind of arms race that we had before, because NATO’s already engaged, has committed itself to increasing military spending dramatically. So, that’s already under foot and those kinds of military developments will continue regardless of the rhetoric which will continue to be very hostile.

The views and opinions expressed by Nicolai Petro are those of the speaker and do not necessarily reflect Sputnik's position.