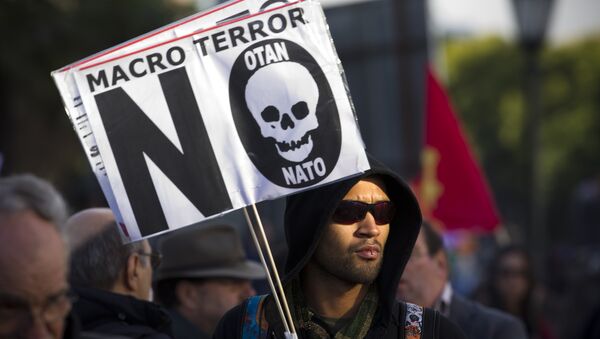 A newly-published collection of documents shows that Boris Yeltsin was misled by US officials, who told him that the Partnership for Peace was an alternative to NATO expansion when in reality it was the precursor to it. Despite objections from Moscow, Washington quietly pressed on with expansion plans.

The new documents, compiled by the National Security Archive from US and Russian government files, show that US officials gave misguiding statements to Russian President Boris Yeltsin about plans for the expansion of NATO. They told Yeltsin that the Partnership for Peace — a NATO program to encourage military co-operation between NATO members and other Euro-Atlantic and ex-Soviet states — was an alternative to expanding NATO. At the same time they were planning to expand NATO membership while dismissing Russian officials' concerns about being excluded from future Europe-wide security partnerships.

‘No One Would Be Excluded'

As noted by the National Security Archive, the Yeltsin government was consistent in its opposition to NATO expansion into Eastern Europe, which they saw as a policy of ‘neo-containment'. In the summer of 1991 NATO Secretary General Manfred Woerner met with Yeltsin supporters and told them that the feared expansion would not happen. Two years later Yeltsin appeared to acknowledge the possibility of new NATO members in a public speech in Warsaw, which the State Department interpreted as a ‘green light' to NATO expansion.

Not long after, Yeltsin sent a letter to President Clinton in September 1993 expressing ‘uneasiness' regarding the discussions on ‘quantitative expansion' of NATO, and advocating a ‘pan-European security system' instead. Yeltsin warned Clinton:

"Not only the opposition, but moderate circles as well [in Russia], would no doubt perceive this as a sort of neo-isolation of our country in diametric opposition to its natural admission into Euro-Atlantic space."

Russia
NATO Chief Accuses Russia of Aggression: What Did He Miss?
The following month, Yeltsin met with US officials in Moscow, including Secretary of State Warren Christopher. A declassified US account of this meeting records how Christopher assured Yeltsin that the Partnership for Peace would include Russia together with all European countries, and was not about creating new NATO members, to which Yeltsin responded ‘this is genius!'.

Christopher would later claim that Yeltsin didn't understand him, and suggested that Russian Foreign Minister Andrei Kozyrev had failed to explain to Yeltsin that Christopher had made clear that the Partnership for Peace would lead to increased NATO membership, to the exclusion of Russia. However, a US cable recording Christopher's meeting with Kozyrev says he told Kozyrev that the US was ‘sensitive to the Russian position', that ‘there would be no predetermined new members', ‘no one would be excluded' and ‘the door to future membership was open to all on an equal basis'.

'A Track That Will Lead to NATO Membership'

Only weeks later, in January 1994, Clinton told Yeltsin that the Partnership for Peace was ‘the real thing now', still promoting the program as an alternative to expanding NATO membership. But on his way to Moscow, Clinton met with the leaders of the Czech Republic, Poland, Hungary, and Slovakia in Prague.

The declassified memos detailing these meetings show that Clinton described the Partnership for Peace as ‘a track that will lead to NATO membership'. While the Americans kept trying to reassure Yeltsin that NATO expansion was a distant probability, they were actively working behind the scenes to lay the foundations for using the Partnership for Peace as a mechanism to recruit new member states.

How Western Media Completely Missed Point of Putin's 'Listen to Us Now' Remarks
By the fall of 1994 the Russian government heard about new Assistant Secretary of State for Europe Richard Holbrooke's plans to speed up NATO expansion. Holbrooke initiated a NATO study to examine the process by which new members could be added. Yeltsin wrote to Clinton again in protest, emphasizing Russian hopes that the Conference on Security and Cooperation in Europe (CSCE) could grow into a ‘full-fledged all-European organization'. Yeltsin complained that ‘one completely fails to understand the reasons behind a new revitalizing of the discussion on speeding up the broadening of NATO.'

This double game being played by the Americans led Russia to refuse to sign up for the Partnership for Peace, and in December 1994 Yeltsin criticised Clinton at a summit of the CSCE, saying:

"Why are you sowing the seeds of mistrust? Europe is in danger of plunging into a cold peace. History demonstrates that it is a dangerous illusion to suppose that the destinies of continents and of the world community in general can somehow be managed from one single capital."

'We Need a New Structure for Pan-European Security'

The US dispatched vice President Gore to try to smooth things over, but when Clinton and Yeltsin met in Moscow in May 1995, Yeltsin was still concerned with the American push for NATO expansion. A record of the meeting shows that Yeltsin objected:

"I see nothing but humiliation for Russia if you proceed… Why do you want to do this? We need a new structure for Pan-European security, not old ones! But for me to agree to the borders of NATO expanding towards those of Russia — that would constitute a betrayal on my part of the Russian people."

Clinton Lost Due to Crumbling of Globalized World Order, Not 'Putin's Vendetta'
Clinton assured Yeltsin once more that any expansion would be ‘gradual, steady, measured' and that ‘I won't support any change that undermines Russia's security or redivides Europe'. Ultimately the two leaders agreed that any NATO expansion would be deferred until after the 1996 Presidential elections in both of their respective countries.

A further Clinton-Yeltsin meeting in June that year in Halifax, Nova Scotia, saw Yeltsin repeat his opposition to increased NATO membership and the Russian preference for the OSCE as a pan-European security institution. Clinton applauded the Russian government for agreeing to join the Partnership for Peace, and suggested greater military cooperation between the two countries. Yeltsin offered similar compliments in return, and then reiterated:

"We must stick to our position, which is that there should be no rapid expansion of NATO… It's important that the OSCE be the principal mechanism for developing a new security order in Europe. NATO is a factor, too, of course, but NATO should evolve into a political organization."

While some scholars have argued that Russian complaints about NATO expansion plans in the 1990s are revisionist and not representative of the facts, the new documents show Russian officials' repeated and consistent objections to US officials throughout this period. In their electronic briefing book The National Security Archive concluded:

"The record of early and vehement Russian objections, including Yeltsin's multiple remonstrances to Clinton, tends to support Collins' analysis from October 1993 and to undercut a claim in recent scholarly literature that Russian complaints about NATO expansion are more a function of today's "memory politics" than "what really happened in 1990 and beyond"."