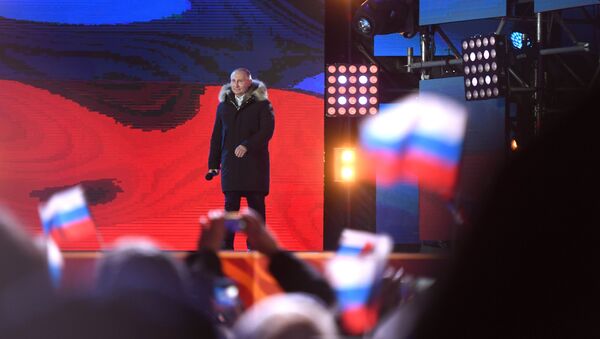 Speaking at his campaign headquarters, Putin discussed preliminary elections results, in which he leads with a huge margin, and disclosed views on key issues and his plans for the future.

Talking before his campaign team at campaign headquarters in Gostiny Dvor, Putin thanked his team for their work.

"It is obvious that with out your direct, honest, professional support we would have had different results. That's why I want to thank you all, and thank all the voters who voted for me," Putin said.

He explained that he views all his voters as his team and estimated the voting result as "decent."

"I think we all are a team, and [I'm speaking] not onunly [about] the people present here, but out there on the Square too, in Moscow, across the whole country — I mean all people who voted for me and whose position allowed for this decent result," he said.

Putin underscored the importance of various Russian political forces to be motivated by common national interests, not some group or clan interests.

"It is very important for us so that […] various political forces were motivated not by group, or some clan interests, but by a national one," Putin said in the headquarters.

He also announced that all changes in Russian government will happen after the inauguration ceremony.

"All changes to the government must be performed by a president, who entered his new term, so now I will think about what needs to be done and how it should be done. All changes will happen after the inauguration," Putin said.

He also revealed that he plans no constitutional reforms for the foreseeable future.

"I don't plan constitutional reforms," Putin said, answering a question about his intentions for the upcoming presidential term. "As for the Prime Minister, the government in common — I already said I'm thinking about it, but I will start contemplating it substantively after the inauguration," he added.

Putin plans to meet all presidential candidates and talk to them in person.

"Yes, I do plan to do that," Putin said, answering the corresponding question. "The administration will contact you. We will sort this out and I will invite them to a meeting. All of them," he added.

Talking about Ukraine, he underscored that everything will be done so that citizens of Ukraine could feel in Russia at home.

"We will do everything so that Ukrainians feel at home in Russia," he said.

He called the situation with Russian voting in Ukraine an outrage, but also said Russia will not retaliate.

"It's an outrage, it is a violation of all international norms… Russia will not retaliate. For us, Ukrainian people is a brotherly people, I already said it," Putin told journalists.

Russia is interested in positive development of international relations with countries on all continents, Putin told the audience.

"We are interested in positive development of relations between states on all continents, and that would be the international agenda," Putin said.

He underscored that Russia is ready to overcome all difficulties in relations with Europe.

"Despite all difficulties, we are ready to work together, ready to discuss all issues and to overcome them," Putin told journalists.

He named China a Russia's strategic partner, and said that Russia values this partnerships and plans to expand on it.

"China is our strategic partner. The level of relations between Russia and China is unprecedentedly high. We value this very much. We congratulate Xi Jinping with his re-election as PRC leader and we express our confidence that China under his leadership and Russia, on our side, will do everything to increase the interaction of the two countries," he said.

Answering the question about the Skripal case, Putin said that if military nerve agent was involved, the victims would have just dropped dead.

"As for this tragedy you mentioned — I found out it all from the media. The first thing that comes to my head is that if a military poison substance was involved, people would have died on the spot. It's an obvious fact, one must understand that," Putin said.

He underscored that Russia has no chemical weapons, because Russia destroyed all of it, unlike a number of international partners.

"Russia has no such measures, we destroyed all our chemical weapons under supervision of international observers. And we did it first, unlike our partners who made promises but failed to keep them, unfortunately," he said.

Russia is ready to cooperate in Skripal's case investigation, but the other side must be interested, too.

"We are ready to cooperate. We said it right away. We are ready to take part in all required investigations, but the other side must be interested in that and we do not see that so far," Putin said.

Speaking about allegations of Russia's involvement in the poisoning, Putin called these allegations "nonsense," adding that no one in Russia would have allowed that before 2018 World Cup.

"I think that any intelligent person understands that this is utter nonsense that anyone in Russia would allow such stunt ahead of Presidential elections and the World Cup. It's unthinkable," he said.

He acknowledged that Russia faces "huge challenges," and that those challenges must be overcome.

"It is important for us to understand that there are huge challenges before us, and we must overcome these challenges, we must complete the nation's tasks. And I count on us all to continue this work together," Putin told his team.

He also recalled his Address to Federal Assembly.

"I did not say it all just for effect. We need a decisive leap forward in developed. We can do it — we've reached the level when we can make this leap," he said.

"It is very important to unite efforts of all people, regardless of what candidate they voted for, because we face very complicated challenges, and we must solve them, not on an ongoing basis, but we need a dash forward, and we can do it; there are all reasons to think so and aim for such result," he said.

When asked whether he looks forward to run for presidency in 2030, he said this is "ridiculous."

"Listen, I think what you are talking about is a bit ridiculous. Let's do the numbers — what, am I going to sit here until I'm 100 years old? No," he said.