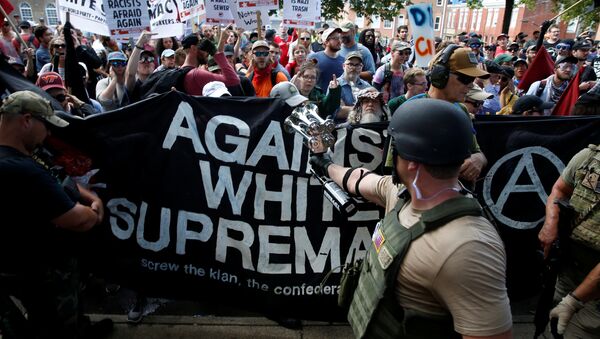 WASHINGTON (Sputnik) - A young black man beaten during a racially-charged protest in the Charlottesville, Virginia, last August was found not guilty on misdemeanor assault charges, the media reported.

The Daily Progress reported on Friday that a US judge in the Charlottesville General District Court found DeAndre Harris not guilty of a misdemeanor assault charge.

US Judge Robert Downer said it was clear Harris did not intend to harm the complainant, the report said.

Harris was brutally beaten on August 12 by a group of men in downtown Charlottesville amid a racially-charged protest.

"I thought I was going to die," Harris said.

On August 12, white nationalists demonstrated against the city of Charlottesville for planning to remove a statue of confederate general Robert E. Lee. The protesters clashed with counter-protesters and Charlottesville police reportedly did not ensure separation between the two groups.

During the protest, a white nationalist rammed his car into a crowd of counter-protesters killing one person and injuring 19 others.