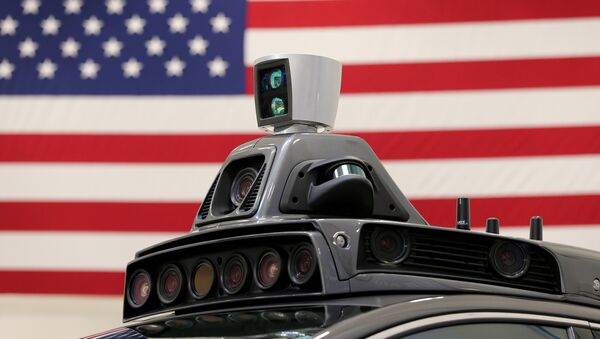 © REUTERS / Aaron Josefczyk/File Photo
Subscribe
Technological progress doesn't rest on its laurels. US-based transportation network Uber has made another step to simplify people's lives by patenting a new technology for its self-driving cars.

The outlet compares the prototype of the vehicle with "the Las Vegas Strip," as it should have strong highlighting in order to compensate for the absence of a human behind the wheel.

Commenting on the application, Uber's product designer Sean Chin said that "in the real world, when there's a human driver, they're usually not shouting out the window, 'Hey I'm slowing down now.' There are subtle things you can do, like a head nod or flashing lights. And while we don't have a final implementation, what we're considering is what is a new language we can create to give people that information."

Was out at Church/Duboce for over an hour today. Self-driving Uber was only car that illegally traveled in the transit lane. pic.twitter.com/uH87CWjnK5

​Uber began testing its self-driving cars in the US city of Pittsburgh back in May 2016, while customers received access to the service the same year, in September.