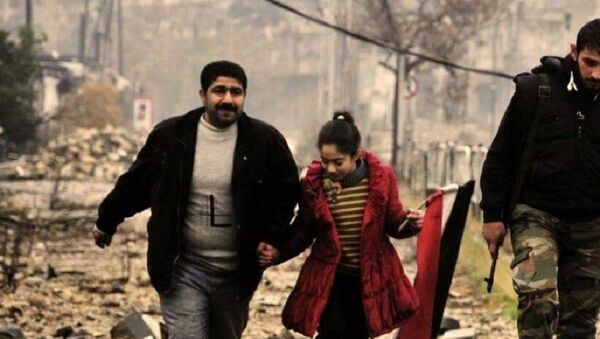 © Sputnik / Antoine Abboud
Subscribe
MOSCOW (Sputnik) - Over 800,000 people have returned to the Syrian city of Aleppo and its suburbs, liberated from the Jabhat al Nusra terrorist group (banned in Russia), the Russian Defense Ministry said in a statement on Saturday, and explained how the US is preventing the return of Syrian territories under government control.

"The province of Aleppo illustrates the efficiency of the work of the Russian reconciliation center for Syria. Over 800,000 people have returned to the city of Aleppo and its suburbs, liberated from Jabhat al Nusra and its affiliated groups, since December 2016. The local authorities provide assistance with housing reconstruction. Markets, shops, schools and medical facilities are working. Agriculture is being actively restored," the statement added.

Additionally, Syrians that left Aleppo and moved to the Idlib province together with fleeing militants in December 2016 had been returning to their homes since March 4, according to Russian military data.

"At least 870 families, a total of 3,409 people, have returned to Aleppo from the Idlib province through a humanitarian corridor, organized by the Iran-Russia-Turkey coordination center, in the region Tell-Sultan – Abu Duhur," the ministry said.

Russia General Staff Chief Explains Who Trained Daesh Leaders in Syria
Meanwhile, the Russian center for Syrian reconciliation is holding negotiations with leaders of Syrian armed opposition groups across the entire war-torn country, the Russian Defense Ministry said in a statement on Saturday.

"Within the implementation of the UNSC Resolution 2401, Russia performs its obligations in full. The Russian reconciliation center holds active negotiations with the leaders of the Syrian armed opposition on the entire Syrian territory," the statement read.

The statement also specified that the Syrian government forces conduct hostilities against irreconcilable armed groups that harass the local population.

However, a US-formed autonomous government in northern Syria has been preventing civilians from fleeing the war-ravaged city of Raqqa, the Russian Defense Ministry said Saturday.

“Authorities formed in Raqqa by the US military from the so-called Democratic Federation of Northern Syria have confined its residents to the districts gutted by the bombs of the US-led coalition, stopping them from going to safer areas in Syria,” the statement read.

The Russian military added only several districts in downtown Raqqa are fit to live in, while most of the city is filled will unexploded bombs and improvised explosive devices, which have already claimed over 500 lives.

MoD: Russia to Respond if its Military Threatened by Possible US Strike in Syria
Moreover, the United States prevents the delivery of any humanitarian convoys to the Syrian city of Raqqa as well as the arrival of the UN mission that would assess the scope of the humanitarian catastrophe in the region, the Russian Defense Ministry said in a statement on Saturday.

"The United Sates continues to hamper the arrival of any humanitarian organizations' representatives in Raqqa, not to mention the coordination of the arrival of the UN assessment mission in the city, which should determine the scope of the humanitarian catastrophe and decide on the volume of the emergency humanitarian assistance to the vulnerable population," the statement said.

According to the statement, only several central districts of the city remain relatively safe, while the rest of the city is dangerous for human habitation.

"Thousands of decomposing bodies of civilians and militants, who died in massive airstrikes on Raqqa, carried out by the US-led coalition, have not been recovered and remain in the rubble. Outbreaks of infectious deceases, which threaten to turn into an epidemic with the arrival of summer, have already been recorded in the city," the statement added.

In addition, the United States and its coalition partners have failed to keep the promises they made when they agreed UN Resolution 2401 to enable humanitarian deliveries in Syria, the Russian Defense Ministry said.

“Despite assurance from the US military that it will let humanitarian aid reach displaced people in At Tanf, representatives of the US military command have blankly refused to guarantee that this aid will be distributed among civilians rather than US-controlled militants,” the statement read.

US to Stay in Syria After Daesh Defeat - CENTCOM
US instructors have been training armed Syrian opposition at a base located at the At Tanf garrison in the country's southeast, close to the Rubkan camp for the displaced people.

“That means that the United States, the United Kingdom and coalition countries, which have actively promoted the adoption of UNSC Resolution 2401, are now completely ignoring their commitments in Syria,” it concluded.

The Council unanimously adopted the resolution in February 24. It ordered all warring parties to immediately stop hostilities and adhere to a long-term humanitarian pause across Syria to ensure the safe and unhindered delivery of humanitarian aid, as well as medical evacuation of those injured.

Moreover, the US army units stationed in the eastern districts of the Syrian province of Deir ez-Zor prevent the return of these territories under Syrian government control, the Russian Defense Ministry said in a statement on Saturday.

"One of the priorities of the Syrian authorities is the return of the population to the eastern districts of the Deir ez-Zor province, controlled by the pro-US units… The US army units located in these districts prevent restoration of the Syrian governmental institutions," the statement read.

The ministry specified that over 23,000 people returned to the districts of the Deir ez-Zor province which have been controlled by Damascus since December 1.

000000
Popular comments
none returning from europe yet?
michael
17 March 2018, 10:59 GMT1
000000
That's great news, wonderful news, that such a large number of people are simply returning where they belong, their Home in that part of Syria. Thanks to the Syrian Army and the Russians. As Ivanw88 said, who cares about them returning....This is when one sees the massive conspiracy of the one-worlders, barbaric, decadent, criminal, war-mongering elites who organise 'coalitions' to destroy whoever is opposed to their Master Plan. To Syria, courage, better times are coming, this time , our Friend will be around. May God bless this , your ancient Land and may it shine again in modest prosperity, good family life, a job for every one, a fair share of the resources, an economy of resources precisely, no wastage, one knows that Syrians will aim for these objectives, in a natural way.
armor
17 March 2018, 10:42 GMT
000000
Newsfeed
0
New firstOld first
loader
LIVE
Заголовок открываемого материала
Access to the chat has been blocked for violating the rules . You will be able to participate again through:∞. If you do not agree with the blocking, please use the feedback form
The discussion is closed. You can participate in the discussion within 24 hours after the publication of the article.
To participate in the discussion
log in or register
loader
Chats
Заголовок открываемого материала
Worldwide
InternationalEnglishEnglishMundoEspañolSpanish
Europe
DeutschlandDeutschGermanFranceFrançaisFrenchΕλλάδαΕλληνικάGreekItaliaItalianoItalianČeská republikaČeštinaCzechPolskaPolskiPolishСрбиjаСрпскиSerbianLatvijaLatviešuLatvianLietuvaLietuviųLithuanianMoldovaMoldoveneascăMoldavianБеларусьБеларускiBelarusian
Transcaucasia
ԱրմենիաՀայերենArmenianАҧсныАҧсышәалаAbkhazХуссар ИрыстонИронауОssetianსაქართველოქართულიGeorgianAzərbaycanАzərbaycancaAzerbaijani
Middle East
Sputnik عربيArabicArabicTürkiyeTürkçeTurkishSputnik ایرانPersianPersianSputnik افغانستانDariDari
Central Asia
ҚазақстанҚазақ тіліKazakhКыргызстанКыргызчаKyrgyzOʻzbekistonЎзбекчаUzbekТоҷикистонТоҷикӣTajik
East & Southeast Asia
Việt NamTiếng ViệtVietnamese日本日本語Japanese俄罗斯卫星通讯社中文（简体）Chinese (simplified)俄罗斯卫星通讯社中文（繁体）Chinese (traditional)
South America
BrasilPortuguêsPortuguese
NewsfeedBreaking
08:56 GMTCIA Reportedly Warned US Military of Likely Presence of Children Near Afghan Drone Strike Target
08:56 GMTFrance, Russia Agree Modalities of Settling Champagne Import Controversy, Minister Says
08:28 GMTThere's No Unreleased Sex Tape of Kim Kardashian, Lawyers Say on Claims of 'Graphic & Better' Part 2
08:26 GMTMan Attacks Guards Over Refusal of Entry Without Health Pass in France, Reports Say
07:38 GMTAustralia Had 'Grave' Concerns Over French Submarine Capability, Prime Minister Says
07:33 GMTEight Dead, 7 Missing in China After Passenger Ship Capsizes
07:33 GMTBoris Johnson Slammed for 'Casual' Approach to National Security, 'Unclear Prioritisation of Risks'
07:16 GMTBritish Boxer Amir Khan 'Kicked Off' US Flight Over Row About Colleague's Face Mask
06:55 GMTAs US Prepares to Leave Iraq, Ex-Advisor to Iraqi President Says Kurds Need Reliable Partners
06:52 GMTTwo Women Arrested for Tearing Up Trump Signs and Snatching MAGA Hat From Child Escape Jail Time
06:46 GMT'F**k Joe Biden!' New Yorkers Take to Streets to Protest Vaccine Mandates, Link COVID Rules to Nazis
05:56 GMTAustralia May Rent or Buy Nuclear Subs From US, UK Until Its Own Fleet is Built Under AUKUS Deal
05:34 GMTColombia Condemns Maduro’s Participation in Celac Summit
05:14 GMTOver 50 London Police Officers Deployed to Oxford Street After Reports of Gunman - Video
04:30 GMTNot My Style: Adorable Golden Retriever Doesn't Like Wearing Shoes
04:26 GMTLive Updates: India Registers 30,773 New COVID-19 Cases
03:52 GMTMeghan Markle Wears Earrings Made of Same Diamonds That Decorate Her Mysterious Pinky Ring - Report
03:12 GMTIsraeli Security Forces Capture Last Two Fugitives Who Escaped From Gilboa Prison, IDF Says
03:10 GMTFrench Blindsided as AUKUS Details Were Discussed at G7 Summit Leaving Macron Out - Report
02:25 GMTBiden Administration Worried High-Level UN Meetings Will Become COVID-19 ‘Superspreader’ - Report